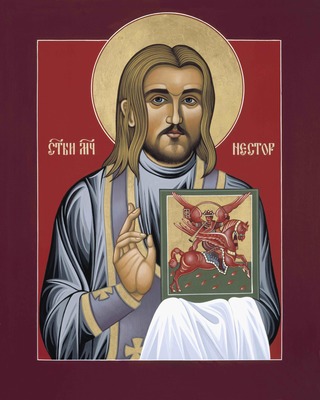 Holy New Martyr Nestor Savchuk 1960 - 1993
“The news from Ukraine is very worrying. I entrust every effort for peace to the intercession of the Virgin Mary and the conscience of responsible politicians. Let us pray in silence…”
Pope Francis
“Discovering vocation does not mean scrambling toward some prize just beyond my reach but accepting the treasure of the true self I already possess. Vocation does not come from a voice out there calling me to be something I am not. It comes from a voice in here calling me to be the person I was born to be, to fulfill the original selfhood given me at birth by God.”
Holy World Evangelist -Thomas Merton
Nestor Savchuk was born in the province of Crimea, southern Russia, as Nikolai Savchuk, in 1960. As a youth he excelled in boxing, wrestling, martial arts, and painting. In his twenties he began to work as an apprentice painting religious murals in Odessa. There, the older artists told him the stories of the Russian saints. Inspired by the saints with a love for God, Nestor set out for the 13th century monastery of Pochaev to become a monk. This love grew naturally and expressed itself through his devotion and prayer with the holy icons, which one day would become the source of his martyrdom. After his ordination his spiritual father advised him to go to an isolated village in the Ukraine, by the name of Zharky. There he found a church dedicated to the Nativity of the Mother of God, which had many ancient icons and from that church he felt a deep mystical feeling and an invitation. There he also found many blocks and difficulties. The church caught fire once and also became the target of an icon stealing ring connected to the Russian mafia. He was warned by the mafia that if he continued to keep the icons from them, he would be killed. Nestor would stay up all night guarding
the church. He was then touched with a desire to ask for the grace of martyrdom. He began to pray for long hours. A friend warned him of this prayer and told him he ought to be asking for a long life of suffering for God instead. Nestor replied, “Yes, I understand that, but maybe if I will pray for martyrdom, perhaps I will be able to pray it out.” Late in the dark morning of December 31, 1993, the friend was awakened by a dream of St John the Baptist who told him to, “ Go immediately to Father Nestor.” But he did not go until that morning where he found Nestor murdered, outside his rectory in Zharky.
Adapted from a brief biography in the book
“Youth of the Apocalypse” by Monks John Marier and Andrew Wermuth
The moment I read Nestor’s life I was drawn to paint/write his icon. I felt his presence very deeply in my life. This icon ended up in the Orthodox Church of St John the Wonderworker, in Atlanta, Georgia. The youth there have a great devotion to St Nestor. In 1994 I was blessed to be asked by the late Archbishop Hurley of Anchorage, Alaska to paint an icon of Our Lady of Magadan, ( a former concentration camp from 1938-1955) which is in the Far East of Russia, four hours flight from Anchorage. When I visited there in October 1995, I went to the Lavra (monastery) of St Sergius of Radonezh. The monks there asked me to paint Our Lady of Pochaev for them. I asked if they knew of Nestor and his martyrdom. They said, “No, there are so many new martyrs in Russia.” I was stunned into silence by their answer. Months later I received a picture of Archbishop Hurley giving Our Lady of Pochaev to the monks and one was bending down to kiss the icon. That’s a picture I treasure and a great honor from the Russian Orthodox Church. We are all aware of the great suffering today in Ukraine and Russia with their need to continue to worship God freely. Our Lady of Fatima asked the three children when she appeared to in Portugal, in 1917, to pray for the conversion of Russia. This was just months before the bloody Bolshevik Revolution, which Russia celebrated in November 2017. St Padre Pio prophesied, “Yes, Russia will be converted as the Blessed Virgin said She would. However, Russia will teach the United States a lesson in conversion.” A vocation to intercede for others, to beg, to fast, to pray is incredibly powerful. I know a lot of you are doing just that right now. Thank you for saying yes to God, for fulfilling your vocation. We really need you now.
In this tense month of February, 2022, O Mother of God, Immaculate Heart of Fatima , Our Lady of Magadan … Lourdes, Pochaev, Kibeho, Akita, Medjugorje, Mother of All Nations, and Ukrainian Holy New Martyr Nestor, help us all move quickly toward the conversion and the peace you both desire for us and the entire World. We ask your powerful intercession especially for the people of Ukraine and Russia.
Amen
Fr Bill McNichols
February 2022