The Bride - The Church 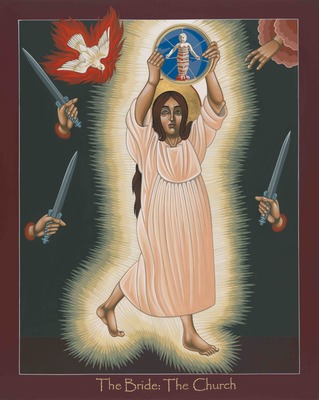 The Bride : The Church
“You are the ones who have stood by me faithfully in my trials...”. Luke 22: 28
Today happens to be the feast of Pope St John XXIII, this is also the feast of the
Maternity of the Mother of God. And, this is the day in 1962, Pope John chose to convene the Second Vatican Council, the first one in 92 years. I was aware and alive to the symbols of the Church, but was always drawn to the ship, or Barque of St Peter. Most people imagine the Church as Michelangelo’s St Peters Basilica in Rome, or the thousands of beautiful structures of every age around the world. But only later, did I truly encounter the Bride. She is a poignant symbol in the Hebrew Bible, with the prophets Isaiah, Jeremiah, Hosea and Ezekiel. And in the New Testament Matthew, Mark, John, 2 Corinthians, Revelation 19 and 21, but especially in the Letter to the Ephesians 5: 22-33. My dear friend and mentor Fr Daniel Berrigan, SJ named his first published book of essays, “The Bride : Essays in the Church,” Macmillan, 1959. In 1996 we would begin collaborating on a book about my icons published by Orbis Press, four years later in 2000, and I titled it “The Bride: Images of the Church.”
In 1992, I was two years into my Apprenticeship in Iconography when the child abuse scandal broke out in New Mexico. It was so overwhelmingly devastating for the victims, and destroyed any positive connection to the church, forever. And the priests, that were innocent of any abuse, all naturally went into an isolated state of shock and grief. I had to find an image of the Church that could never be abused or even touched, in any harmful way. I read the magnificent book, “The Splendor of the Church” (written lovingly while he himself was silenced by the church) by Cardinal Henri de Lubac, SJ. I began to see the Bride as the only possible image of the Church that I could feel and ponder safely inside me.
In 2008 I was given my first exhibit of solely original icons and images, at the Millicent Rogers Museum In Taos, I named, “Silence in the Storm.” For this exhibit I painted this image of the pregnant Bride, surrounded by a protecting radiance which shielded her from any and all evil. And this is my firm belief that nothing demonic can ever come near her essence. She is pregnant with always new members, new souls. She is led by the Holy Spirit and covered by the hand of the Father. She upholds a Medallion of the Holy Child, after the beautiful work for the Ospedale degli Innocenti, in Florence, by the Renaissance master, Andrea della Robbia.
Fr Bill McNichols 💮 11 October 2021