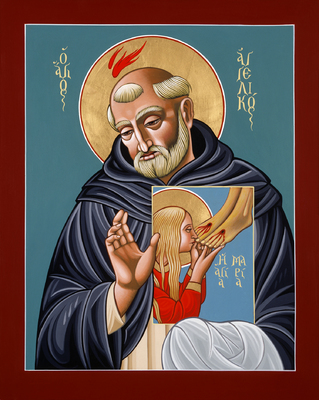 Beato Fra Angelico (1400-1455) - Patron of Artists - feastday 18 February
“Freely you were given, freely give.” St Matthew 10:8
“On June 23, 1983, Pope St. John Paul II granted official cultus to Fra Angelico, who is now Blessed with an office, a Mass and obligatory memory as Patron of Artists. Fra Angelico, baptized Guido di Pietro, was born around 1400 in Vicchio, a Tuscan town near Florence. At the age of twenty, he entered the Dominican Order at the Priory of San Domenico in Fiesole . He took the religious name of John whence the appellation Fra Giovanni de Fiesole. He died in Rome on February 18, 1455, and is buried in Santa Maria Sopra Minerva where his tomb remains an object of veneration...was this remarkable priest a painter of the Middle Ages or the Renaissance? The answer varies with the preconceptions of the critics, many of whom consider him a painter of transition.”
John Rubba, OP, “Fra Angelico”
“Fra Angelico’s life, by evidence, ran its course without a question, without a doubt, in uninterrupted service to God in the exercise of a God-given talent...Fra Angelico managed, as if without trying, to simplify the sometimes rather fussy pageantry of late-medieval painting without thinning it -he weeded it and gave it room to grow-and to unite heavenly sweetness with earthly truth as if any question as to their identity were ridiculous...Because of his gentleness, Fra Angelico is often underestimated as an artist even by his admirers, who tend to settle for his sweetness without recognizing his strength...Fra Angelico reconciled revolution and tradition by reconciling Massaccio’s realism-the projection of figures in light and space on a monumental scale-with the essentially miniature technique of the late-medievalists such as his probable teacher, Lorenzo Monaco.”
John Canaday, “The Lives of the Painters”
The Dominican motto, along with “Veritas,” is “Contemplata aliis tradrere,” (which is to share what you have seen or contemplated), reaches its zenith in Beato Angelico. Our great contemporary Swiss medical doctor and mystic, Adrienne von Speyr (20 September 1902-17 September 1967) sees Fra Angelico, while she is in an ecstatic state under obedience to her spiritual director, Cardinal Hans Urs von Balthasar, who was also her companion in a Mission, in fact he once said, you cannot separate my theology from hers. She said of Fra Angelico, “I see him (Adrienne smiles). He loves the Way that leads to God and is held in a continual contemplation of this Way. And if he paints, then he paints this Way. The saints he paints, the angels he presents, are all for him the expression of this Way. And in everything he experiences - even theological, philosophical, even if it is something extreme that remains incomprehensible to him -he can only concur if it can be brought into harmony with this Way. As soon as he comes to the Way, everything is clear to him, and he would be very capable of drawing very subtle distinctions. It is as if God had designated him to represent this Way to Him. So everything is also related that is given to him in contemplation, everything that he experiences in prayer and in daily life, everything is referred to this Way leading to God. It is the Way of being like a child, of childlikeness, of the childhood of God. It is the Way of holiness, the Way of renunciation in love of neighbor, which is so far developed that always the Lord and His holiness are seen in the neighbor. Art is given to him. He has not exactly chosen it. It is so much his talent and corresponds to him so much that it chose him more than he chose it. But for him it is one with religion, with love for God...he is one of his smiling saints.”
Adrienne von Speyr, “The Book of All Saints”
A blessed feast of Beato Fra Angelico to everyone especially - all who devote their lives to the vocation and work of Art. And a special thank you to my artist sister, Marjory McNichols Wilson who posts these blogs and helps me in every way!
Fr Bill McNichols - February 2020