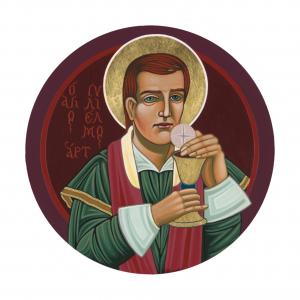 Blessed William Hart 1558
15 March 1583
Diocesean Priest And Martyr
(On Asking Our Dear Brother In Heaven For A Commitment Not To Give Up And To Continue To Try And Live In God/Love)
“Everybody looks so ill at ease, so distrustful, so displeased, running down the table I see a borderline...”
Joni Mitchell, from the song, “Borderline” 1994
“As a hart longs for flowing streams, so longs my soul for you, my God.
My soul thirsts for the living God. When shall I come and behold the face of God ?”
Psalm 42
“The joy of this life is nothing; the joy of the afterlife is everlasting.”
Blessed William Hart
William Hart was born in Wells, Somerset, he studied at Oxford, and there became a convert to Catholicism. He then studied for the priesthood at Douai, Reims, and Rome. After receiving Ordination in March 1581, he went back to England and ministered to Catholics in hiding, such as the family of St Margaret Clitherow, also to Catholic prisoners in York Prison. He was betrayed to English authorities by an apostate on Christmas Day, in 1582, at St Margaret’s estate. He was hanged, drawn and quartered, at York on March 15, 1583 and beatified by Pope Leo XIII In December 1886.
Taken from :
The Lives of the English Martyrs , volume 2, by Dom Bede Camm, OSB,
London, 1905.
(There are more “wonders” you can read about William on the Internet.)
I was supposed to be named William Henry after my grandfather, Billy and Uncle Bill.
My Mother Marjory Hart McNichols told me the story, that after I was born her Mother ,Mimi Hart (who died in 1950, a year after I was born)called Mom and asked her to name me William Hart instead. That name has affected me positively all my life in such wonderful and mysterious ways. In fact, it led to my deeply loving, supportive and lasting friendship with my cousin Kathi Hart. We used to write each other letters and on the envelope we’d put, “from a Hart-to a-Hart.” We also talked on the phone almost everyday from age 9 until 17. I can’t imagine how I would have gotten through grade school or high school without her tremendous God-given gift of humor making me laugh, (even at myself - up to this very day) and unconditional love.
I learned much later , that a hart was an old English term for a deer. And so the thirsting deer became a symbol of my soul, and our souls, longing continually for the touch of God. St.John of the Cross was also fond of the symbol of the thirsting deer. My friend Christopher Summa made a film about my icons in 2015-16 called “The Boy Who Found Gold” (based partly on the great Jungian writer, Robert A. Johnson’s ideas in his book “Inner Gold”) and Chris uses the symbol of the deer to tell his story of my soul’s “journey in art so far” - but I know that all our stories are very similar, in that we are all in love with the God, know it or not, who gives us life everyday. We can feel this presence inside of us and with age ...... this longing grows stronger and stronger.
I have always been attracted to the English Martyrs and one night, up in my house covered deep in snow, in Arroyo Seco, New Mexico in 2011, after I’d been given my first iPad by my friend Maya Sharp, I stumbled across the name of Blessed William Hart. I did drawings for his icon then, but could only get the chance to paint him after I moved to Albuquerque in 2013.
Dear Blessed William,
Give us some of your strength and faithfulness in following your vocation, as it was given to you; in the way you understood it and lived it with such youthful Wisdom.
Dear heavenly friend, help us wade through what we see as sometimes impossibly divisive and angry times. You know what it felt like to be on one side of a division so vitriolic and hateful, that it led to murders of Protestants and Catholics - all in the name of God.
Bring us out of this dangerous blindness by your loving heart. We don’t seek perfection, we can start anew each day - if that’s what it takes. But we do need the courage to find your way to keep an open and loving life inside of God in whom we live and move and have our very being. Maybe it’s a way in which we look at this life and all the turmoil, as fleeting and temporary, (“Dust in the Wind ...” as the song goes...) and yet we know how we try to continue to love each other lasts forever.
Amen, and “thank God (and you)ahead of time” as Blessed Solanus Casey used to say!
Fr Bill McNichols
March 2019