Dedication of the year 2020 to the Most Holy Trinity 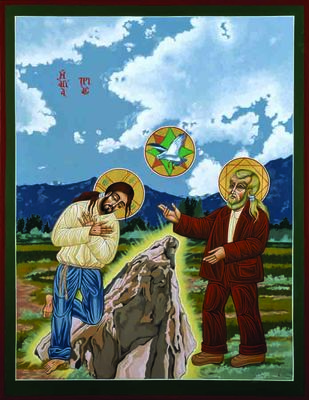 Dedication of the year 2020 to the Most Holy Trinity
“The arms of God be around my shoulders,
the touch of the Holy Spirit upon my head,
the sign of Christ’s Cross upon my forehead,
the sound of the Holy Spirit in my ears,
the fragrance of the Holy Spirit in my nostrils,
the vision of Heaven’s company on my lips,
the work of God’s church in my hands,
the service of God and the neighbor in my feet,
a home for God in my heart,
and to God, the Father of all, my entire being,
Amen
Ancient Celtic Prayer
The Apparition of the Most Holy Trinity in Arroyo Seco, New Mexico
“There exists a legend here in the village as to why the parish is named La Santisima Trinidad. The original settlement was not in the area of the current plaza. It was much higher up, toward the foot of the mountain called El Salto de las Aguas, where the five waterfalls stream down from the mountain.
Two families from Abiquiu were the original settlers in this part of the Taos Valley, which was dangerous because of the tribes who attacked the Taos Indian Pueblo and Spanish settlements. The families lived in a large fortified complex at the foot of El Salto. The remains of three torreones can still be seen. The parents would leave the fortified compound during the day to clear the lower fields for cultivation with firm parental instruction to their children to stay within the safety of the walled hacienda and not go wandering off. The children, being children, left the protection of their home and wandered down the Rio Lucero (Arroyo Seco Creek) where one day they encountered two strange men. Surprised to see men who appeared to be Spanish settlers, the children asked where the men lived, for they thought they were the only Spanish settlers in this part of the valley. The men responded that they lived further on down the river. When the children asked if the men got frightened, living so exposed in the open of the lower valley, they responded that they were not frightened. And besides, the men said, a white dove lived in the tall trees near them and made loud cooing noises whenever anyone approached, thereby serving as a warning of approaching danger.
Departing, the children returned home and told their parents of their encounter with the two neighbors. The parents, knowing they were the only Spanish settlers in this part of the valley, decided to investigate for themselves. The two families walked downriver. Soon, the children spotted the white dove in a treetop. They immediately recognized the bird the two men had told them about. As the bird flew from tree to tree the two families followed it. At last the bird landed in an open area on a large rock and then flew off. The people noticed the rock was somehow different-luminescent. They turned the rock over and discovered an ancient bulto, or wood carving , of La Santisima Trinidad. When the children spotted the bulto they immediately cried out, ‘Those are the two men we saw!’ The families recognized that it was the actual Trinity, God the Father, Son and Spirit(the dove ) who had appeared to the children. The current church is built over the site of the rock. The Arroyo Seco Plaza was built around the church, and the ancient bulto is enshrined in a side altar.”
This legend is narrated by Fr Vincent Paul Chavez former pastor of Most Holy Trinity Parish.
I am personally dedicating this year of 2020 to the Holy Trinity in hopes of a recreation and renewal of our endangered planet, also praying for all peoples who are looking for a safe home, and all of us that we can learn to listen, have patience and begin again each day to love one another.
A Blessed New Year !
Fr Bill McNichols