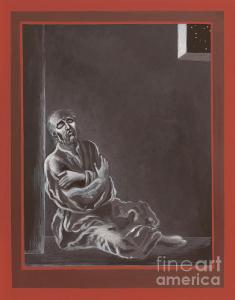 "Before, I knew you only by hearsay
but now, having seen you with my own eyes,
I retract what I have said,
and repent in dust and ashes."
Job 42:5,6

"Where did you hide,
My love, leaving me thus to moan?
Like the stag, you fled,
Leaving in me this wound;
I ran calling loud, but you were gone."
San Juan de la Cruz
Spiritual Canticle

"I, I who have nothing
I, I who am no one
Adore you, and want you so.
I'm just a no one, with nothing to give you but
Oh I love you."
Carlo Donido
Giulio Rapetti

"The summer had inhaled and held its breath too long
The winter looked the same, as if it never had gone
And through an open window where no curtain hung
I saw you
I saw you
Comin' back to me."
Marty Balin

"John of the Cross speaks to people who feel unable to change. We may have sensed in our lives a call to freedom,
to wholeness, to more than what we are now.
John felt this as a call to reach out for God..."
The Impact of God : Soundings From St John of the Cross
by Iain Matthew, OCD

I found this truly wonderful, healing book in a Jesuit House in Dublin. I could tell - practically across the room -by the painted face on the spine of the book, it was either St Bruno or St John of the Cross. In 1998 there were not many books on either man. I then asked the Jesuits there; could I have it ? They said yes . This was late December 1997 and my Father had recently died on November 25, 1997. The book was so healing I just bought a notebook and began to copy it word for word, (and later gave the notebook to my niece Marjy). Now I can't remember if I copied the whole book or just a few chapters, but I've never tried to copy a whole book since that December. I think when you're grieving it helps to do something "mechanical "which doesn't take much thought. Finding words by Iain Matthew, around my grief helped so much, because I could not express what I was feeling- even to myself. This book is still one of the best I know on St John, and I tell everybody about it. Not too long after, in 1999 I met Mirabai Starr who had beautifully translated St John's
"The Dark Night of the Soul" while she was struggling and in the depths of grief , with her daughter Jenny's premature death.
I remember two things vividly from Iain Matthew's book:
That John and his brother Francisco used to love to lay out in the fields at night and look into the stars of the "dark night." Centuries before Dionysius the Areopagite had written mystically about the "dazzling darkness" but John was too young then to know of his work. He and Francisco saw this without prompting.
The other incident that has never left me, is when John escaped from his tiny, latrine, prison cell, in August 1578 (he was imprisoned December 1577) and was very very fragile and emaciated. He made his way to a Carmelite convent and when they saw him, they were so overjoyed the nuns wanted to sing him a happy Te Deum Hymn. John was shaken badly and held onto something like a banister, and motioned to the sisters with one hand - No, no, no. He was not yet ready to rejoice.
St John of the Cross is the poetic giant (at only about 4' 11" tall) who writes achingly and most expressively about our deep life-long longing for God; this is truly an understatement.
Some references for things I have found helpful:
• The icon of Juan de la Cruz by my teacher Friar Robert Lentz, OFM
•"Search For Nothing" by Richard Hardy
a magnificent sung version of the poem The Dark Night, "One Dark Night" by John Michael Talbot and his version of "O Living Flame of Love."
• Mirabai's translations of both John and Teresa of Avila
• St John of the Cross by Antonio de Nicolas
• anything by the Carmelites, Iain Matthew or Noel Dermot O'Donoghue
This monochromatic image of a gaunt and sickly John in prison was a meditation for me - that we do eventually, come out of our dark nights, but no one can tell you when. Grief has its own time and even the One experiencing the emptiness etc, does not know the time of its fulfillment.
I'm going to quote Iain Matthew on St John and Our Mother because it's so relevant for now:
"When John speaks of the Mother of Jesus, it is in this connection. She moved freely, refusing to let herself be paralyzed by past or future. In her mountain climb, she renounced the need for preplanned handholds, opting instead to surrender to the guidance, the hand of Another. Her hope set her free to be possessed fully in each moment by the Holy Spirit.
As with faith, so with hope, John can emphasize a letting-go, in this case of past and future, only because he is convinced that God is hovering, pressing, to come in and fill the gap. And he will fill it:
'Where God is concerned, hope attains as much as it hopes for.' "
Page 107

Dear St John of the Cross
You found God in the most painful situations in your life
by waiting-in-hope-in-the-darkness.
Help us Teach us Show us, your way of trust and
enduring love.
Amen