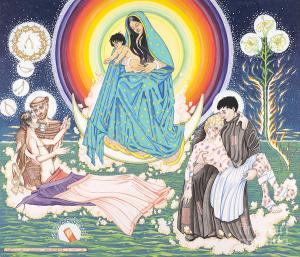 For St Francis Day: "The Epiphany: Wisemen Bring Gifts to the Child" 1984
"... and St Lawrence the Deacon, led his persecutors looking for the wealth and treasures of the church to a house filled with the poor of Rome. He opened the door and said 'Here are the treasures of the church.' " Legend of St Lawrence
When I was living in Manhattan in the 1980's I was invited to show a "Son et Lumiere "
(sound and light) show I'd been commissioned to do in 1981 by St Joseph's Church in the West Village of NYC. The commission was to honor the 800th birthday of St Francis. There was a small house called the "Little Portion" (English for Porziuncola) founded by Friar Andre' Cirino, OFM, where the Third Order Members of St Francis would have gatherings. They heard about the slide show and invited me to bring it up to the Bronx. After visiting a few times I asked if I could join too. The decision had to be made in Rome, and in 1984 I was accepted. I spent many happy days and nights at the Little Portion and that year did my first painting for the Church....aimed like an arrow to elicit compassion, about people with AIDS. It was called "The Epiphany:Wisemen Bring Gifts to the Child." The Franciscans of NYC made this painting into a holy card and sent it round the world. I did hear later that in his memoir about AIDS, "Borrowed Time" the brilliant writer Paul Monette (1945-1995) referred to this card saying that all the Catholic Church is doing is sending out a holy card, but there were Catholic women and men giving their lives at that time for people with AIDS. This story has yet to be told. When I became an iconographer I painted/wrote an icon specifically for people with HIV/AIDS entitled "Mother of God Light In All Darkness."
There were two saints, in this first painting, I chose as the Wisemen, Sts.Francis and Aloysius bringing the first two men I met through my Hospice work in 1983, to Our Lady of Guadalupe and the Santo Nino on her lap. It took six months to complete and was done in watercolor and gouache. Mary and Child were seated on a rainbow and crescent moon from the Book of Revelation. Beneath them are the waters of death we speak about in the funeral prayers, "In Baptism, your child received the Light of Christ. Scatter the darkness now and lead him/her over the waters of death." I had always been haunted by that exquisite song, "Clara, Clara," from Gershwin's "Porgy and Bess." It goes "Clara,Clara, don't you be downhearted! Clara, Clara, don't you be sad and lonesome! Jesus is walkin' on the waters, rise up and follow him home, O Lord, O my Jesus, rise up and follow him home, follow him home."So...to symbolize the footsteps of Jesus I have red vigil lite candles bobbing on the waters.
The symbols I chose for St Francis were wishbones falling from the Crown of Thorns, symbols of hope coming from the terrible sufferings. The symbols I chose for Aloysius, (often shown with a shaft of lilies,as with St Joseph a sign of his purity), were three lilies surrounded by fire to show most of us find this inner and outer virtue, through fire. This painting eventually led to my apprenticeship with the Russian American Master Iconographer, Friar Robert Lentz,OFM, because he saw it printed in a magazine and wrote me a rather funny letter, saying, "It looks like you're trying to do Icons you should come to New Mexico and study with me." The magazine never forwarded his letter but through the providential grace of God I eventually was led to ask for an apprenticeship, and then Robert told me about the letter. I think I explained this a little better in Christopher Summa's film "The Boy Who Found Gold."
Later I created a drawing to advertise a play at the Little Portion, called "The Flower in the Hand-The Story of St Francis and the Stigmata-A Love Story, A Love Song," by Roberta Nobleman. This was one of the most beautiful plays I have ever seen, based on the ancient Italian text "The Five Considerations on the Holy Stigmata." I finally made this hand into a painting you can view it under St Francis section on the website.
I never tire of telling people that when the Friars would wash the bandages covering St Francis' wounds, they would use the water mixed with his blood to heal sick animals and people. This is hope for us that our wounds can even now or eventually be used for the healing of others too. I believe most of our ancient and contemporary Prophets, who have been publicly mocked or martyred in various ways, prove that this is so...
"Dearest Mary, Our Lady of Guadalupe, Mother of the Poor and Oppressed
we watch full of reverence and joy as St Francis and St Aloysius bring the gifts of
these two people afflicted with AIDS to the Holy Child in your arms, who is so eager to receive them.
Teach us to find and embrace your Son Jesus in all peoples, but most especially those who are in greatest need and who suffer most.
Amen" (1984:NYC)
Fr Bill McNichols
October 2017