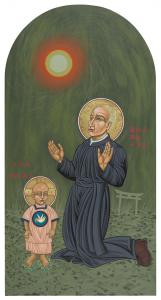 Holy Father Pedro Arrupe, SJ in Hiroshima with the Christ Child
(For Arrupe College in Chicago)
"violets here and there
in the ruins
of my burnt house"
Shokyu-Ni
1713-1781

Dear Fr. Katsouros,
Here are some notes, not really a complete statement yet...a Beginning of my own understanding of what I was given to paint...but with the latest news these days I'm sure this is not all there is to say about nuclear weapons or war. We stand right now in a most dangerous place, again. In fact I may use this as a blog because we are still in the midst of an unresolved crisis.
I wanted to image Fr Arrupe in prayer in Japan but not the Iconic photograph that you always see and is as impossible to recreate in a better way-as is Our Lady of Guadalupe or the Shroud of Turin.
It is not well known that Fr Arrupe survived Hiroshima and the utter devastation. The swirling sun is a visual reference to the bomb and the prophetic miracle of the sun at Fatima on October 13, 1917. We don't know what that spinning sun meant...was it a meteorite, atom bomb, or some other danger of falling fire?
How do you depict that scene of Hiroshima or Nagasaki in a way that is redemptive and not just horrifying?
I found many photographs of the aftermath and one had a, Shinto Gate still standing.
This Torii Shinto Gate symbolically marks the transition from the profane to the sacred. This still standing gate is (to me) a miraculous sign that the sacred, of that ancient culture, had not been completely destroyed. There was also a head of a statue of Mary and a Church which was not completely destroyed, if I remember correctly Hiroshima and Nagasaki had the two greatest populations of Christians. But I wanted the visual emphasis on all the Japanese . So I also placed a Japanese looking ( (although he could be seen as "every child") Christ Child near to Fr Arrupe. He is wearing a traditional garb as I found in a picture I'll send you , with an Origami-like dove of the Holy Spirit on his chest... or coming from his heart . The colors most often used for Jesus are blue (divinity) over red (humanity) - here the red has faded into a salmon color and the blue is still vibrant . The Child is looking first at the horrendous scene around him on the ground....devastation everywhere. But beneath his feet, because he is "the resurrection and the life" small flowers or violets begin to sprout.
The letters above the Child are Japanese for "Jesus Christ" and the letters near Fr Arrupe are "Holy Priest Pedro." These were obtained from a friend who knows a Jesuit priest at Sophia University in Tokyo.
I feel this is all I can say now, when I began this icon the nuclear threat was not present and hopefully we will reflect on what has been and listen to the words of the Lost Child from the Gospel of Luke about "Did you not know that I must be in my Father's House?" (Luke 2:49) And maybe we will see the whole Earth as His House we are not permitted to destroy? For further contemplation you might look into Thomas Merton's poem "Original Child Bomb" , the name the Japanese gave to the bomb, which expresses a horrific new child and religion. The poem is written in a chilling bureaucratic style to awaken us from The Nightmare of God ( Daniel Berrigan's title for his commentary on The Book of Revelation) completely antithetical to the Gospel of Jesus. As I write this we still have time and Holy Hope...
Blessings with love and prayers to you and all faculty and students at Arrupe College,
Fr Bill
September 2017