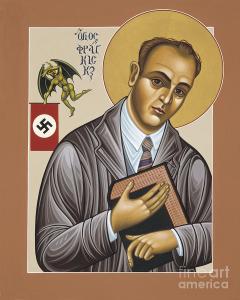 Holy New Martyr Blessed Franz Jaggerstatter
"Through His bitter suffering and death, Christ freed us only from eternal death, not from temporal suffering and moral death. But Christ, too, demands a public confession of faith, just as the Fuhrer, Adolf Hitler does from his followers....I am convinced that it is still best that I speak the truth, even if it costs me my life....I cannot and may not take an oath in favor of a government that is fighting an unjust war....I thank you dear Jesus, too, that I am privileged to suffer and even die for Him...The heart of Jesus, the heart of Mary, and my own heart are one, united for time and eternity. Mary with Child so dear, give us all your blessings."

From a letter Franz wrote from prison to his wife and children.
This young Austrian prophet, husband, father, and member of the Third Order of St Francis refused to be inducted into Hitler's Army and was beheaded on August 9, 1943. St Edith Stein died at Auschwitz on August 9, 1942.
Franz was beatified and declared a martyr on October 26, 2007 by Pope Benedict XVI. His daughters and wife, Franceska , attended his beatification.

"Born under that murky, ambiguous sign: not a double cross, so to speak, but a bent cross, disabled,tampered with, horribly altered, crooked, nightmarish. Dare we admit it: this is the Cross which (despite all frantic denials) we too are born under? Or the one we create for ourselves? I would not venture that Franz saw this from the first (who does?)-only that he saw it eventually. That cross hideously altered in form: a cross that favors deception, war making, unaccountability. He saw. And he told what he saw. And then he died in witness to what he saw....His world was no vacuum; more like a tornado . The chariot of Nazi Germany rolled on like a wheel of fire, the wheels ground to bits whoever, by mischance or heroic purpose, put themselves in the way. Franz put himself in the way...Indeed, Austria is under the gun (and loves it, as the wild welcome given Hitler and the plebiscite showed !). But for Franz the world is going to very hell. In a tank. In a (newly created) bomber. In a blitzkrieg. In a racing train, as he saw in a dream...This is appalling, unbearable. Christians are climbing aboard. Priests and bishops. And then the faithful...That train, streaming toward him in the darkness: All aboard for hell ! What to do ? The burden of asking one's soul, again and again, and with little help from others - what to do ?
...He was condemned to die; and then to stay dead. Or so they thought , those who thought for, or opined for, church and state...To speak of today: it is no longer Hitler's death train we ride, the train of the living dead. Or is it ? It is. The same train. Only if possible (it is possible), the train is longer, faster, more commodious...As for Franz, he will not go away. He will not go away from the church that sent him on his way alone. His way, which should have been the way of the church. So he lingers, half unwelcome. Like a speechless mouth, like a mysterious cry, hovering on the air, seeking a hearing.
Listen: 'Love your enemies, do good to those who maltreat you. Walk another mile. Refuse the easy ride, damnation as destination. Is this to be accounted the resurrection of Franz - that the gospel should at last gain a hearing ?"
From "The Bride: Images of the Church"
by Daniel Berrigan, SJ
Orbis Books 2000

"Lord,
Fill us with that spirit of courage
which gave your Martyr Blessed Franz
strength to offer his life in faithful witness.
Help us to learn from him to cherish your law
and to obey you rather than men.
We ask this through our Lord Jesus Christ, your Son,
who lives and reigns with you and the Holy Spirit,
One God, forever and ever."
Amen
Fr Bill McNichols + August 2017