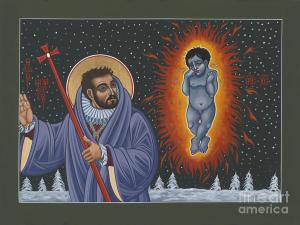 Holy Poet-Martyr St Robert Southwell and The Burning Babe
In an essay on the Spiritual Exercises of St Ignatius, Roland Barthes, the brilliant writer of linguistics, comments that this small book which was long supposed to be of little literary value, is actually one which creates a whole new language. In its painstaking attention to sensory and contemplative detail, it is a school for writers and image makers. Many schools of prayer would warn the students about visions and the use of images. Luther and the Reformation cried out, “The ear, the ear alone is the Christian organ.” The Flemish and Spanish mystics would further caution against the praying imagination, pointing to the cloud of unknowing, the dazzling darkness, the void en route to God. Barthes claims that “...to these mistrustings of the image Ignatius responded with a radical imperialism of the image: product of the guided imagination, the image is the abiding material of the Exercises...It can be said that Ignatius takes as much trouble filling the spirit with images as the mystics (Christian and Buddhist) do in emptying them out ...” Enter, St Robert Southwell (1561-1595) poet, martyr, genius image-maker and gifted “graduate of the school of Ignatian Exercises.” He delights in turning a phrase to make us see a new side of the mystery he is contemplating; taking us by the hand into a scene to share in his amazement. For example, he takes a kind of Ignatian “aerial view” from the cosmos, over the Nativity of the Lord calling us to: “Behold, the Father is his daughter’s son. The bird that built the nest is hatched therein...Might feeble is, and Force doth faintly creep.” In a brief poem to the Child Jesus called “A Childe My Choyse” are found these beautiful, unforgettable lines: “First friend He was, best friend He is, all times will try Him true.” Robert’s 19th century spiritual descendant, Gerard Manley Hopkins (the father of modern poetry) would later contemplate these lines and almost echo them in his poem “The Lantern Out of Doors” speaking also of the Savior as “...first, fast, last friend.” There is no one like St Robert. His poetry evolved from a somewhat stiff neo-classical style to a vivid,playful devotional praise of God. There is so much adoration in Robert. He loves and adores the Holy Family , the Child Jesus, the saints he sees closest to Jesus in the Gospels ,like Sts Peter and Mary Magdalen. Robert’s most famous poem, “The Burning Babe”actually anticipates the devotion to the Sacred Heart of Jesus by almost a hundred years. He has been termed a minor poet of the Elizabethan Renaissance, but I think this has more to do with his pure and devotional subject matter than with his gifts as a poet. The English poet and dramatist, Ben Jonson said he would have given anything to have written “The Burning Babe,” and there is scholarly talk of Robert Southwell’s influence on the art of William Shakespeare. Robert was betrayed by a family friend , Anne Bellamy, and captured in June of 1592 by the sadistic monster, Richard Topcliffe who led him, bound in chains, to his residence next to the Gatehouse prison at Westminster , where he had his private torture chamber. On February 21 , 1595 Robert was taken to Tyburn to be hanged, drawn and quartered. The crowd was hushed and reverent as he prayed three times including a prayer for England and Queen Elizabeth. He begged Our Lady and all the saints and angels to intercede for him, ending with Jesus last words, “Father, into your hands I commend my spirit.” The cart that he was standing on slowly pulled away and left Robert hanging. Ordinarily prisoners were taken down while still alive and then dismembered. As the hangman moved to take him down the crowd growled, “He prayed for the Queen!” Then, mercifully the hangman pulled his legs breaking his neck. The long years of horrific suffering came to an end. Afterwards his heart was said to have leaped from his body at the touch of the knife.
His head was cut off and placed on a spike on London Bridge; his body cut into four parts and exhibited around the city as a warning. It is said that two collections of Roberts devotional poems fell into the hands of Elizabeth after his death; upon encountering his beautiful soul in the poems, she deeply regretted his murder. Tragically, three hundred Protestants were also murdered under Elizabeth’s sister, Queen Mary. St Robert Southwell, along with Edmund Campion, Margaret Clitherow and forty other English and Welsh martyrs, out of three hundred Catholics, were canonized by Pope Paul IV in 1970. Their feast is December 1st.
Fr Bill McNichols
27 November 2017
In his 2014 Christmas CD “If On A Winter’s Night” - the British singer-songwriter Sting put St Robert Southwell’s poem “The Burning Babe” to music.