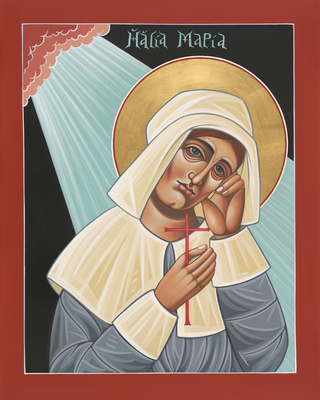 Holy Quaker Martyr Mary Dyer
Mary Dyer (ca. 1611–1660) was a Puritan
convert to Quakerism who became one of
the four people known as the Quaker martyrs of
Boston. She was publically executed by the Puritans
in Boston on June 1, 1660.
A major theological strand of Puritanism in
the Boston colony had reduced Christian religious
beliefs to moralism, and the fruits were
often a rigid judgmentalism. Violators could be
singled out and ostracized by the community.
Mary, along with her mentor, Anne Hutchinson,
had resisted this strand of Puritanism, favoring an
alternative to strict Puritan theology that emphasized
more of God’s grace and mercy. Mary’s
support for Hutchinson, when the latter was
exiled from the Boston colony, singled her out for
persecution as well. During this theological controversy
in the community, Mary also had a still
birth of a deformed baby, and she had it buried
in secret. This fact eventually came to light, and
the circumstances were used to discredit her in
order to discourage the followers of Hutchinson.
Later, Hutchinson had a miscarriage as well and
was subjected to the same scrutiny. The distorted
theologies prompted their adversaries to construe
these events as God’s punishment upon the two.
Eventually Mary and her family would convert to
Quakerism and relocate to Rhode Island. It was
her return trips to her former home at the Boston
colony that got her into trouble. The Puritans
were threatened by the growing Quaker religion.
The story of these women corroborates the theory
of scapegoating put forth by René Girard, who
argues that these women are singled out because
they threaten the established order, demonized for
their miscarriages, and blamed for bringing chaos
into the community. It also highlights the feminist
critiques of patriarchy, which emphasize how
women have been cast into rigid roles and punished
when they venture outside of them. Patriarchy
includes a preoccupation with women’s bodies.
New England had a significant influence on Bill
in his earlier years of priestly formation and ministry.
Bill copied an illustration as a model for this
icon. He wanted to bring attention to the effect of
New England Puritanism, especially as depicted
in Nathanial Hawthorne’s classic American novel
The Scarlet Letter. The red cross Mary Dyer holds
near her chest in the image recalls Hawthorne’s
image of the scarlet letter A. The light descending
from the cloud refers to the inner light, which is
a central and distinctive aspect of Quaker spirituality—
God’s light dwells within. This means
that everyone is equal, and so the Quaker idea of
church is very simple in its structure. There are no
leaders, and the official name they give themselves
is the Society of Friends.
There is a certain double meaning in the phrase
used by one of Dyer’s accusers when he described
her execution. He stated, “She did hang like a
flag for others to take example by.”However,
her example, rather than acting as a deterrent,
promoted the cause that eventually moved the
Puritan community beyond its persecution of
the Quakers. Her witness was one of genuine
imitation of Christ. Mary Dyer represents someone
who challenges deviated transcendence and
distorted religious practices, especially those who
co-opt genuine religious values and distort them
into vehicles of violence. She represents integrity,
peace, and the compassion of the Gospel; someone who is faithful to her inner light within.
From Book by John D. Dadosky
Image to Insight: The Art of William Hart McNichols