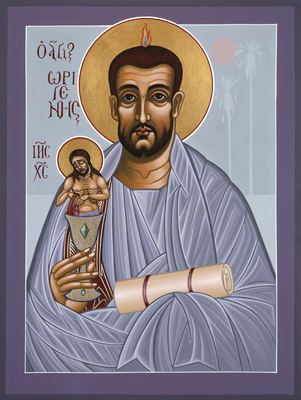 Holy Theologian Adamantius Origen: Spirit And Fire (185-254)
“Jeremiah, while the people are captive in Babylon, makes his lamentations over the city, the country, and the people because of what happened. He makes these laments in individual stanzas beginning with each letter of the Hebrew alphabet...if we see the soul - which is contemplative by nature, able to survey and attend to things that exist...altogether subject to hostile powers, we shall somehow understand both the captivity and the one taking captive. But taking refuge in Christ, who proclaimed, according to the prophet Isaiah, ‘release to the captives’ (see Lk. 4:18; Isa. 61:1), we shall be liberated from captivity...for Jesus came to ‘lead those in bondage out of their bonds and those sitting in darkness from the house of custody.’ “
Origen’s “Commentary on Lamentations”
When Origen was 16 years old his father, St Leonides, (feastday 22 April) was martyred. His mother hid his clothes so that the young boy could not run out and follow his father. This murder left an indelible mark, wound, impression on Origen’s soul. Ever after he would seek ways to give his life in the most extreme and radical ways. He endured theological and physical persecution, torture and finally died at the age of 70 having been broken by his imprisonments and torture. It is only in the recent past, that he has been “rehabilitated’ and given a place of honor as a Holy Theologian and Faithful Son of the very early Church, by Cardinals Danielou, de Lubac, and von Balthasar. I became fascinated with Origen as a young seminarian, hearing extreme and shocking stories about him. Who was this man really ? It so happened that my great teacher and friend, Fr Robert Daly, SJ had translated von Balthasar’s book from the German, called “Origen : Spirit and Fire.” Which I will quote from below. This icon, I felt compelled to write/paint, is of the incredible scholar, teacher, and theologian, shown in Alexandria, holding a chalice with the martyred Christ pouring his blood into the cup; Origen’s cup too. Origen also holds a scroll of Holy Scripture which he loved, contemplated and taught. The flame or fire of the Holy Spirit hovers over his mind.
“ It is all but impossible to overestimate Origen and his importance for the history of Christian thought. To rank him beside Augustine and Thomas simply accords him his rightful place in this history. Anyone who has given long hours to studying the Fathers will have had the same experience as a mountain climber:the slow, steady, receding of the seemingly still-threatening peaks all around him, until, beyond them, the hitherto-hidden dominant central massif rises majestically before him. None of the great Fathers, from the Cappadocians to Augustine, and on up to Dionysius, Maximos, Scotus Eriugena and Eckhart, could escape an almost magical fascination of the ‘man of steel ‘, as they called him. Some were completely swept away. Jerome, when commenting on Scripture, continues to copy straight from Origen’s pages, even after outwardly breaking in anger the chains and fiercely denying the bond that linked him to the master. Basil and Gregory of Nazianzen, in their enthusiastic admiration, make a collection of the most fascinating passages from the inexhaustible works of the one to whom they continually returned when their day to day struggles allowed them a moment of peace. Gregory of Nyssa was even more thoroughly captivated. The Cappadocians transmit him practically intact to Ambrose, who also knew and copied him firsthand. Infact, many of the breviary readings of Ambrose (as well as of Jerome and Bede) are practically word for word Origen. Thus, flowing simultaneously from several directions, the heritage of Origen, already becomes the common possession of the Church, poured over Augustine and through him into the Middle Ages. But in the East he is subject of wave upon wave of enthusiasm...For there is no thinker in the Church who is so invisibly all-present as Origen.”
By Hans Urs von Balthasar, 1938, “Origen: Spirit and Fire.”
Continued Prayers and Blessings of this painful, yet luminous Easter season !
Fr Bill McNichols April 2020