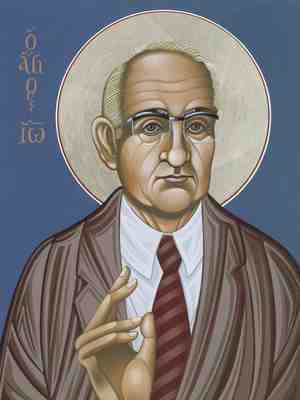 Holy Theologian Cardinal Hans Urs von Balthasar (1905 - 1988)
“Even if a unity of faith is not possible, a unity of love is.” (And)
“Wastefulness is the original Christian attitude... The entire Passion occurs under the sign of this complete self-wasting of God’s love for the world.” von Balthasar
Literally right before he died von Balthasar was summoned to Rome by St John Paul II, to receive the Cardinals cap. He had refused it twice, joking but also seriously saying to John Paul that he didn’t need a red hat. He had already written about, and told John Paul, that he felt Cardinals were not necessary. John Paul’s answer was to summon him to Rome and receive this honor; von B ( I use this abbreviation affectionately) died just before he was supposed to fly to Rome. He was loved and respected by John Paul and at von B’s urgings, he apologized to the world about 100 terrible things the church has done over the centuries. von B told him, (and it was later formally requested by Cardinal Ratzinger) the church cannot go into the 21st century without this lengthy apology. His final apology was to women. And even though things are not moving fast enough for many people, if you had told me in grade school, in the pre-Vatican II Church, that one day we’d have women lector’s, communion ministers, altar girls, and maybe one day deacons again, I would not have believed you. One of my theologian friends once told me if we could combine von B with Gustavo Gutierrez, Dorothee Solle and Elizabeth Johnson, Thomas Merton, Ilia Delio, Elizabeth Fiorenza, J. Baptist Metz, or the Berrigan brothers, we would have a “near perfect” theology. Other names of prominent women and men could be added of course; living and dead. I think also of my theologian friends John Dadosky, James Martin, SJ, Megan McKenna, James Alison and Christopher Pramuk, and of course Dr St Hildegard . What I’m trying to say is better said by St John Cardinal Newman in a quote that my teacher, Franciscan Brother Robert Lentz placed in the hand of his Icon of St John Cardinal Newman: “The voice of the whole Church will in time make itself heard.” We were introduced to von B by our Novice Master, Fr Vince O’Flaherty, SJ In 1968. He instructed us to read the book “Prayer.” Since that time I personally, have been fed by his writings and during my Hospice years in New York and then in my iconographer’s apprenticeship, I read all 7 volumes of his “Glory of the Lord” series. It was in New York that my deceased friend Eddie Oakes, (Fr Edward Oakes, SJ) who wrote the brilliant book on von B, “Pattern of Redemption ” introduced me to Adrienne von Speyr. Balthasar states that she was so influential in his theology that the two of them must be taught and read together. He speaks about their mission together in his book “Our Task.” I have written about her, and shown the icon I wrote of her, in one of my Facebook blogs. I am introducing you to von B now because I’d like to write about my icon of Holy Theologian Adamantius Origen in a blog around the feast of his father, (April 22) Holy Martyr St Leonides of Alexandria. And I must use von B’s dramatic and scholarly rehabilitation of Origen, to write about him.
During this time of the pandemic, we are all quarantined and I’m trying to see it (as I tried during the many years of the AIDS pandemic) as a possible contemplative opportunity to go deeper into God and point ( as always with images and icons) to the guides who also had to endure many different kinds of suffering and still held onto the Hope that is in God’s eternal love for us.
The first volume of the 7 in “The Glory of the Lord” series is about beauty, and it’s called “Seeing the Form.” Here is a part of the opening of the book.
“The word with which we embark on in this first volume of a series of theological studies is a word with which the philosophical person does not begin, but rather concludes. It is a word that has never possessed a permanent place or an authentic voice in the concert of the exact sciences,and, when it is chosen as a subject for discussion, appears to betray in him who chooses it an idle amateur among such very busy experts. It is, finally, a word untimely in three different senses, and bearing it as one’s treasure will not win one anyone’s favours; one rather risks finding oneself outside everyone’s camp...
Beauty is the word that shall be our first... We no longer dare to believe in beauty and we make of it a mere appearance in order the more easily to dispose of it. Our situation today shows that beauty demands for itself as much courage and decision as do truth and goodness, and she will not allow herself to be separated and banned from her two sisters without taking them along with herself in an act of mysterious vengeance. We can be sure that whoever sneers at her name as if she were the ornament of a bourgeois past whether he admits it or not - can no longer pray and soon will no longer be able to love.”
To me just thinking that this was first published in English in 1982, before there was much talk about the possible devastation of the earth, I think in this area alone, of global warming and infection in every way ... was/is prophetic. And like all prophets contains a warning and a hope.
A blessed Easter season, stay safe during this painful ,crucial, and yet Holy Kairos Time.
Fr Bill McNichols April 2020