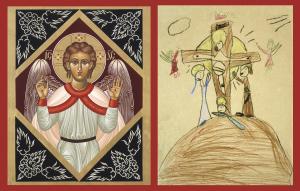 Here it is just near the beginning of May and why write a blog about this icon concerning the Wounds? Two reasons :
1) The Season of Easter is the season of the post resurrection appearances of Jesus where he shows us his wounds
2) I am corresponding with a dear Sister in Norwich (Great Britain) who has a metal print of this icon and I owe her an explanation, so ....

Dear Sister,
I've been meaning to write to you for months, about this icon, but now in the Easter season (as well as Autumn when Francis and Padre Pio received the Wounds) seems to be a good time ......One very curious observation and question ; more women have received the wounds than men. Doesn't this make them a second Christ or an icon or image of Christ? With all these contemporary battles in the church about men and women ...I wonder.
We believe the Holy Spirit raised Jesus from the dead and my understanding of the gospels is that His body was healed of all the horrific damage of His flagellation and crucifixion, except the five wounds. Have you ever wondered why? Well, I have for over 60 years. In the New Mexican Church which is the oldest tradition in the US, over 500 years, there is also a devotion to the shoulder wound, where he carried the Cross, as well as the other five.
I believe my understanding of the passion, blood and wounds of Christ come very early from my elementary teachers, the Sisters of the Precious Blood. These women laid the groundwork of a devotion, quite naturally, (almost like osmosis) and I drew my first Crucifixion at age 5.
Suffice it to say this pull towards the Wounds of Christ, as well as wounded saints, has been the subject of many drawings and paintings in my life . I am most fond of the painting of Francis receiving the Wounds hanging in the Fogg Art Museum at Harvard by Taddeo Gaddi (I once made a retreat in Boston where I visited this painting every day) and of course the Giotto's in Florence and Assisi. This particular two winged Seraph is a copy of a fresco by Giotto I saw in a book in 1992 and cannot find it now, or I'd tell you where to look. Around the same time two events occurred in the News which sparked my desire to paint the Seraph for all those people who are tragically killed and especially the ones no one hears about or knows. The first event was the finding of the Romanov bodies or charred remains in Ekaterinburg, Russia. The second was the violent murder of 22 year old Navy officer Allen Schindler, who was beaten to death because he was gay, by two other fellow shipmates in Sasebo, Nagasaki.
The Russian Orthodox decided to build a church on the spot of the Romanov burial ground called "The Church On The Spilled Blood." I thought to myself , in the west we would never call a church by that graphic, yet profoundly evocative title. Then, I decided to honor every human tragic murder with an icon of Christ which would say in painted form, the words of God in the King James Version of Genesis 4:10 "What hast thou done? The voice of thy brother's blood crieth unto me from the ground!"
The late Prophet Daniel Berrigan once said that the first murder in the Bible was a brother killing a brother, and it's been that way ever since.
We all have wounds. Some are hidden, some are even beneficial in that they awaken compassion for others .... and some cause us to wound others. I know for me, mine won't stay hidden so I'm trying to use them to feel the wounds of others as was the idea behind Henri Nouwen's famous book " The Wounded Healer." I'm afraid this is not always the case with Henri or myself. Yet is this the reason the Wounds of Jesus and our wounds do not disappear? Of course Christ was innocent and never intentionally hurt anyone, and as Isaiah said ( 53:5 ) "By his stripes we are healed." Yet we can work toward our wounds being a source of healing for us and others in this way... let me end with one of my favorite stories of the Wounds of St Francis.
The Friars would have to change the bandages that wrapped Francis' stigmata. Instead of disposing of them, they would drop them in buckets of water to feed the sick people and animals and all the "two legged and four legged" (as Native peoples say) creatures would get well.
My intention for this icon was/is that gazing on the Innocent One Wounded By and For Us, would bring about such love for him that we would begin to try and heal one another, not by hiding our wounds, but by using them to see and understand as many forms of human suffering that God wills to show us.
With love and continual gratitude to you dear Sister,
Fr Bill
27 April 2017