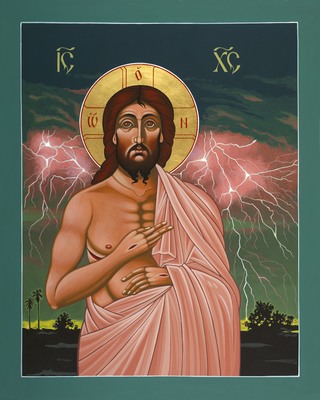 La Gloriosa Venida de Cristo Rey (The Glorious Coming of Christ the King)
“For as lightning flashes and lights go up the sky from one side to the other, so will the Son of Man be in His day.”
Luke 17:24
“...Jesus answered, ‘My kingdom is not of this world; if my kingdom were of this world my followers would fight to keep me from being handed over to our leaders. But my kingdom is not of this world.’ “
John 18:36
All through my life as an iconographer, I have wanted to portray the second coming or return, of Christ the King. Through the vision and insight of the late Fr Paul Locatelli, SJ the former president of the University of Santa Clara de Asis, and the Jesuit community at the University, I was given the blessed opportunity. That’s why I set this scene, this return, in Santa Clara, California.
St. John Paul II’s inspiration to call the time of his papacy “the New Advent,” appeared at the very beginning of his first encyclical, “Redemptor Hominis,” In 1979. Two years before in 1977, the prophetic theologian William Stringfellow had published two articles (still available) of great power, wisdom, and Biblical insight about how Christians are to live in the Second Advent of the Lord. Stringfellow wrote, concerning the two Advents, “The manger scene itself is a political portrait of the whole of creation restored in the dominion of Jesus Christ in which every creature, every tongue and tribe, every rule and authority, every nation and principality is reconciled in a homage to the Word of God incarnate.” From “A Keeper of the Word : Selected Writings of William Stringfellow “ edited by Bill Wylie Kellerman, see also “William Stringfellow: Essential Writings (Modern Spiritual Masters) Orbis Press.
Apparitions of the Mother of God in Fatima, Amsterdam, Akita, Japan, Bosnia, Medjugorje, Rwanda, Africa all point to a prayer for peace and for a longing (equal to the first Advent) for the Returning Christ the King. Probably the most dramatic, loving and radiant of these revelations in our own time have been to St Faustina Kowalska asking for a deep trust and devotion to His Divine Mercy. Jesus calls all of us to stay awake with our lamps lit awaiting Him, Our Lord and Bridegroom. In the sacrament of Baptism we are all anointed as kings and queens of a kingdom that, as we say in the Nicene Creed, will never end. This is not just a kind endearing fairy tale fantasy but literally the truth.
“High above, he set his tabernacle for the sun, who comes forth like a bridegroom leaving his chamber.” Psalm 19
“Then I saw heaven opened, and behold, a white horse ! He who sat on it is called Faithful and True...He is clad in a robe dipped in blood, and the name He is called is The Word of God...on His robe and on His thigh He has a name inscribed, King of Kings, and Lord of Lords.” Revelation 19: 11, 13,16
“Jesus Christ is the same yesterday, today, and forever.” Hebrews 13:8
Advent begins in just one week, November 29 !
Fr Bill McNichols 💮 22 November 2020
“Maranatha! Come Lord Jesus!”
Revelation 22:20