Mary Most Holy Mother of All Nations 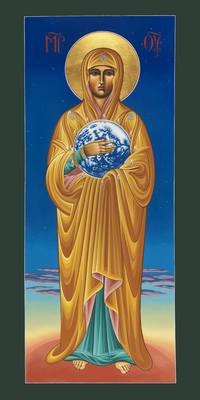 Mary Most Holy Mother of All Nations
“...Laudato si, mi Signore, per sora nostra
Matre Terra, laquale ne sustenta et gouerna,
et produce diuersi fructi con coloriti
flori et herba.
Laudato si mi Signore, per quelli ke perdonano
per lo Tuo Amore
et sostengono infirmitate et tribulatione...”
(“ Praised be You, my Lord, through Sister
Mother Earth, who sustains us and governs us
and who produces varied fruits
with coloured flowers and herbs.
Praised be You, my Lord, through those
who give pardon for Your Love,
and bear infirmity and tribulation...”)
Canticle of the Sun by St Francis of Assisi
The Canticle of the Sun is first mentioned by Thomas of Celano in the first biography of Francis, written in 1228 just two years after his death. (This is personally my favorite biography of Francis !)
St Francis is thought to have composed most of this timeless song, written in an Umbrian dialect of Italian, in late 1224, near San Damiano. This was after receiving the 5 Wounds of Jesus Crucified (the Stigmata), around the feast of the Holy Cross on Mt La Verna , September 14, 1224. And while he was recovering in a small branch-like covering built by St Clare and the Poor Ladies of her convent, he dictated his final poem, song.
“Though physically blind, he was able to see more clearly than ever with the inner eye of his mind. With unparalleled clarity he perceived the basic unity of all creation and his own place as a Friar in the midst of God’s creatures. His unqualified love of all creatures, great and small, had grown into unity in his own heart. He was so open to reality that it found a place to be at home everywhere anywhere. He was a centre of communion with all creatures.”
From the British Friar, Fr Eric Doyle, OFM (1938-1984)
“ Pope Francis is calling on Catholics to participate in ‘Laudato si Week’ in May 2020 to encourage care for our common home.”
“I renew my urgent call to respond to the ecological crisis. The cry of the earth and the cry of the poor cannot wait anywhere...the urgent challenge to protect our common home includes a concern to bring the whole human family together, for we know that things can change.”
Reported by Courtney Mares, Catholic News Agency
It seems odd but I feel as we get sicker and home bound, nature is getting better, and since we’re not attacking or fracking Mother Earth (I hope and pray) as much as usual, during just one month, she seems to be truly alive and joyful.
This icon was written/painted in Manhattan in 1997. I was going to paint the background deep midnight blue with stars, but one day while I was just beginning the icon, I stepped outside the former Jesuit Community upper west side apartments, on 98th and Broadway at sunset, and between the streets I could see the sun setting over the Hudson River. All the colors were magnificent and I knew I had to try and capture them. Our Mother is cradling our Mother Earth, as St Francis called her, and in a flash, in my imagination I saw 12 flames of the Holy Spirit circle the holy globe. I knew that the message I was given to portray was hope .
Mary stands on a red hot globe, some have seen as the core of the earth which turns rocks into diamonds ! I know I painted it, but am still not sure what the hot red globe is ? Having worked and lived through the AIDS pandemic in the 1980’s I witnessed hundreds of deaths, among the thousands, and yet I believe it ultimately made the lgbtq community stronger, wiser, more compassionate.
In May we wait for God’s Spirit to once again green Mother Earth, inside out.
And we beg Our Mother Mary’s intercession, in her month of May, to help the scientists and doctors to find a way to end this present pandemic.
“ Remember O most gracious Virgin Mary
That never, was it known, that
Anyone who fled to thy protection was left
Unaided. Inspired by this confidence,
I fly unto thee, O Virgin of Virgins,
My Mother;
To thee do I come, before thee I stand,
Sinful and sorrowful.
O Mother of the Word Incarnate,
Despise not my petitions but in
Thy clemency
Hear and answer me !
Amen”
“The Memorare” thought to have been composed by St Bernard of Clairvaux
Fr Bill McNichols 2020