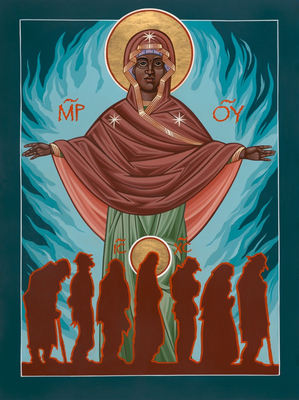 Mother of Sacred Activism (with Eichenberg’s Christ of the Breadline)
“My book called ‘A Life of Jesus’ may cause surprise for American readers when they discover an interpretation of Jesus somewhat at odds with the image they now possess. Jesus as I depict him is a person who lived for love and still more love; and yet was put to death, for he chose to live without violent resistance. My way of depicting Jesus is rooted in my being a Japanese novelist. I wrote this book for the benefit of Japanese readers who have no Christian tradition of their own and who know almost nothing about Jesus... The religious mentality of the Japanese is - just as it was when people accepted Buddhism - responsive to one who ‘suffers with us’ and who ‘allows for our weakness,’ but their mentality has little tolerance for any kind of transcendent being who judges humans harshly, then punishes them. In brief, the Japanese tend to seek in their gods and buddhas a warm-hearted mother rather than a stern father. With this fact always in mind I tried not so much to depict God in the father-image that tends to characterize Christianity, but rather to depict the kind-hearted maternal aspect of God revealed to us in the personality of Jesus.”
From “A Life of Jesus” by Shusaku Endo 1973
A few years ago the great British author of many books on universal mysticism, Andrew Harvey, decided to found an Institute of Sacred Activism, and he asked me to create an icon of a Black Madonna. When I’m not copying an existing icon, such as Our Lady of Yaroslavl, Vladimir or Mother of God Similar to Fire, I must imagine how to portray Our Mother. I saw this as a kind of Pentecost icon with Fritz Eichenberg’s powerful drawing he did for Dorothy Day and the Catholic Worker, “Christ of the Breadline.” This image of Christ follows Shusako Endo’s Jesus who, as he said, “suffers with us.” The Black Madonna is surrounded by the blue flames of the Holy Spirit, and she brings the Church into a new era as we, today, begin a long and beautiful healing process. I wanted to show this icon for Dr Martin Luther King Day because he epitomizes the very concept of Sacred Activism. In fact he is the very definition of those words.
“Life’s most persistent and urgent question is, ‘What are you doing for others ?’
...Darkness cannot drive out darkness; only light can do that . Hate cannot drive out hate; only love can do that...The time is always right to do what is right...Every man lives in two realms: the internal and the external. The internal is that realm of spiritual ends expressed in art, literature, morals, and religion. The external is that complex of devices, techniques, mechanisms, and instrumentalities by means of which we live... We may have all come on different ships, but we’re in the same boat now.”
Dr Martin Luther King Jr.
Fr Bill McNichols 💮 January 2021