Our Lady of the New Advent, Gate of Heaven 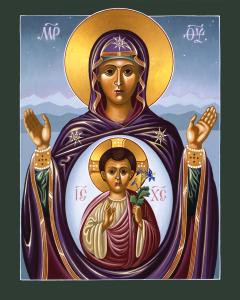 Our Lady of the New Advent, Gate of Heaven
from "Image to Insight book" by John D. Dadosky
In the winter of 1991, Bill’s work on an icon
titled Christ Emmanuel was interrupted by his
first and perhaps most important commission
by Cardinal Stafford of Denver. Stafford wanted
to honor the theme of John Paul II’s papacy of
the New Advent, which the pope pronounced in
his first encyclical Redemptoris Hominis (1979) in
advance of the new millennium. The pontiff concludes
the encyclical with the following words:
Only prayer can prevent all these great succeeding
tasks and difficulties from becoming
a source of crisis and make them instead the
occasion and, as it were, the foundation for
ever more mature achievements on the People
of God’s march towards the Promised Land
in this stage of history approaching the end of
the second millennium. Accordingly, as I end
this meditation with a warm and humble call
to prayer, I wish the Church to devote herself
to this prayer, together with Mary the Mother
of Jesus, as the Apostles and disciples of the
Lord did in the Upper Room in Jerusalem
after his Ascension. Above all, I implore Mary,
the heavenly Mother of the Church, to be so good
as to devote herself to this prayer of humanity’s
new Advent, together with us who make up the
Church, that is to say the Mystical Body of her
Only Son. [Emphasis added.]
Bill presented three images of Our Lady of
the Sign to Stafford to consider as copies for
the Lady of the New Advent. Stafford chose the
nineteenth-century icon of Our Lady of the Sign
to be the model. Bill chose the face of Virgin
Orans, based on a thirteenth-century icon, Virgin
Blachermittissa, currently in the Tretyakov gallery
in Moscow. He placed the boy Jesus in the oval
mandorla. Jesus holds the Colorado state flower,
the columbine. Behind the two figures are the
Rocky Mountains. The dark hair and skin on the
Jesus figure provides a more inculturated image,
reflective of many residents and immigrants in
the western United States.
The theology of the New Advent is encapsulated
in the following prayer, which makes up an
additional verse for the advent hymn “I Wonder
as I Wander”:
When the Angel appeared to the Virgin in
wait,
Her “Yes” was the opening of Heaven’s gate.
Blessed among women her child would save,
The children of Adam from sin and the grave.3
In the nineteenth-century icon, from which
this icon takes some of its inspiration, Mary’s
cuffs are gold. These reflect the liturgical vestments
of the Orthodox church when celebrating
the Eucharist. The color of her robe is purple,
which is the ecclesiastical color for the season of
Advent.
This image is part of an exhibit in Denver at The McNichols Civic Center Building through Jan 6
to buy catalog from exhibit go to:
http://www.lulu.com/…/light…/paperback/product-23861739.html
to purchase Image to Insight book got to:
https://www.amazon.com/Image-Insight-William-H…/…/0826359132