Our Lady of the New Advent - The Burning Bush 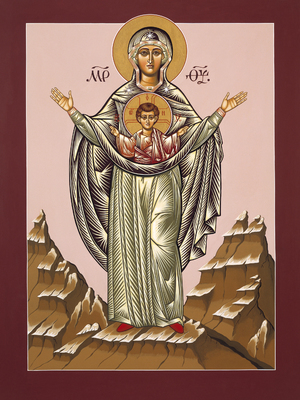 Our Lady of the New Advent : The Burning Bush
“I beg you, dear children,
beginning today,
start to love,
with a burning love,
the love with which I love you.”
Message of Medjugorje, May 29, 1986
“O resplendent Virgin, here on the miraculous mountain
cleft everywhere by dazzling wonders,
and which all the faithful climb;
behold them with your merciful eye of love...”
“On this mountain, the Lord of
hosts will prepare a
banquet of rich food. On this
mountain the
mourning veil covering all peoples,
and the shroud enwrapping all nations,
He will destroy death forever.
The Lord will wipe away tears
from every cheek, He will take away
His people’s shame everywhere on earth,
for the Lord has said so ...”
Isaiah 25:6-8
“Now Moses was tending the flock of his father-in-law, the priest of Midian,
and he led the flock to the far side of the wilderness and came to Horeb,
the mountain of God. There the angel of the Lord appeared to him in flames of
fire from within a Bush. Moses saw that though the bush was on fire it did not burn up. So Moses thought, ‘I will go over and see this strange sight - why the bush does not burn up.’”
Exodus 3:1-4
Some of the most beautiful icons of the Mother of God entitled “The Burning Bush” are referring to this miraculous apparition in Exodus. Mary is literally filled with God and does not burn up. I think this is also a unique way to look at one of my favorite icons called, “Mother of God Similar to Fire.” I was extraordinarily blessed by Archbishop (now Cardinal) Stafford to create two icons of Our Lady of the New Advent; the first for the Archdiocese of Denver, and the second one you’re seeing now, for St John Paul II, which I was asked to give him at World Youth Day, 14 August 1993. The first is in Denver and this one is part of the Vatican Museum. The day I gave it to St John Paul, eventually began changes and understandings that are still, after all these years, unfolding for me. But the most precious honor bestowed on these icons is that Archbishop Stafford asked St John Paul for a Feastday of Our Lady of the New Advent and was given the day before the ancient “O Antiphons” begin, 16 December. Thanks to Pope Francis, creating a year of Joseph, I feel like we’ve got St Joseph as a guide, every day now. And I fully expect personal as well as world changes because of this consecrated year. I invite you to let St Joseph be your companion too. I can’t tell you exactly how to do this, except to simply say yes and ask him. St Teresa of Avila in a chapter on St Joseph in her autobiography will fill you in on all that Joseph will bring you . Just ask. This probably would never have happened without Pope Francis love of Joseph. He has made famous and available, at Church Goods Stores everywhere, a statue of the Sleeping Joseph (or you can order this statue online). He says before he goes to sleep, he puts all the pains and troubles of our pilgrim church under the statue, and lets Joseph take over. You can do this too, with any of your worries and troubles. Pope Francis’ Birthday happens to be 17 December which is also the feastdays of St Lazarus of Bethany and Holy New Martyr Nestor Savchuk. I have also been blessed to paint/write icons of both of these saints.
St John Paul II called the last years of the twentieth century, the New Advent, and he prayed the coming of the third millennium of Christianity would bring a New Evangelization, a new springtime of faith. After meeting him in 1993, I felt like my work should strive to be part of the New Evangelization, whether it be images or icons. As St Francis of Assisi once said, “Preach the Gospel always, and sometimes use words.”
Happy Feastday of Our Lady of the New Advent and abundant blessings (and surprises, even in the midst of painful times) of this year of St Joseph !
Fr Bill McNichols 💮 16 December 2020