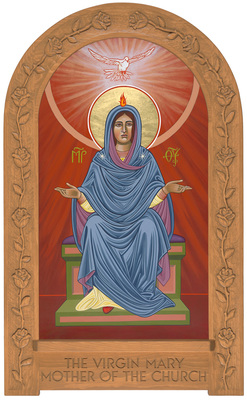 Pentecost Sunday and Mary Mother of the Church : Come Holy Spirit
“In Roman Catholic Mariology, Mother of the Church (Latin: Mater Ecclesiae) is a title officially given to Mary by Pope Paul VI. The title was first used in the 4th century by St Ambrose of Milan, as rediscovered by Hugo Rahner, SJ. (author of the book Our Lady and the Church) It was also used by Pope Benedict XIV in 1748 and then by Pope Leo XIII in 1885. Pope St John Paul II placed it in the Catechism of the Catholic Church ... in 2018, Pope Francis decreed that the Memorial of the Blessed Virgin Mary, Mother of the Church be inserted into the Roman Calendar on the Monday after Pentecost (also known as Whit Monday) and to be celebrated every year.”
Wikipedia
“One interesting bit of church architecture is known as the ‘Holy Ghost Hole.’ It consists of a large opening purposely left in the ceiling. This was most commonly done in Medieval churches throughout Europe, but has been repeated in other places throughout the world. The tradition was meant to remind the faithful of the coming of the Holy Spirit at Pentecost and to be a visible reminder that the Holy Spirit continues to descend upon Christian Disciples. The spiritual symbolism was further reinforced on Pentecost day, when someone would climb up onto the roof and send down various symbols of the Holy Spirit. Fr Francis Weiser explains in his book ‘Holyday Book’ that live doves or pigeons would sometimes be used, as well as burning pieces of straw...”
Philip Kosloski
Eight years ago I was assigned by Archbishop Michael Sheehan to help out at St Joseph on the Rio Grande Church. And nearly every time I’ve celebrated Mass there, while I’m sitting in the celebrant’s chair I look up into the large hole in the beautifully crafted wooden ceiling. And though I did not know about the ancient tradition of the Holy Ghost Hole until today, it is exactly what I’ve been praying for all during these past years. Pope Francis has spoken beautifully about the Church as Mother in his homily for Monday’s feast, and I know he would like to see more women and lay men involved in the decisions and hierarchy of the Church. This is one of those issues where the need is so great, and many people are angry that it’s still taking so long. I personally believe Francis is doing everything he can to make this a reality. But I am fully aware that’s my personal belief in Pope Francis . I think it comes from growing up with my Dad who was Governor of Colorado, and watching him try to make advances for so many people and being continually opposed. Yet in his obituary the Denver Post ended this way: “He combined his dedication to the underdog with his courage to stake his all on what he believed was right. Each of the other governors elected to succeed him exceeded his longevity in office; none has exceeded his accomplishments.” Right before he died in 1997 he wrote me a very personal and beautiful letter. In it he spoke about my need to listen for and follow the guidance of the Holy Spirit. It was most unusual for Dad to write this way so it has stayed with me all these years as a kind of prophetic word. In this icon Mary is solemn with an ever so gentle upturning of her mouth, as if she is awaiting the arrival of the Spirit, as she did in the first Pentecost. As Mother of the Church she knows our problems and what is needed most of all right now to keep us all following the Gospels. She knows the Holy Spirit never goes backwards but always creating anew. Her throne is not made of gold, but Hildegardian greens and warm colors. The Flame of the Spirit hovers above her. Doctor St Hildegard of Bingen saw the Holy Spirit as the “greening agent” of the Most Holy Trinity, and she put these inspirational visions into some of her 77 songs as well. In this era of urgent need to protect Mother Earth, as St Francis of Assisi called her, I have great hopes that young people will be given some “miraculous inspirations/interventions” from the Holy Spirit and help to save our world.
“Come Holy Spirit, fill the hearts of your faithful and enkindle in them the
fire of your love. Send forth your Spirit and they shall be created. And You shall renew the face of the earth.”
Amen
Fr Bill McNichols 💮 Pentecost 2021