Princess Diana- The Queen of Hearts 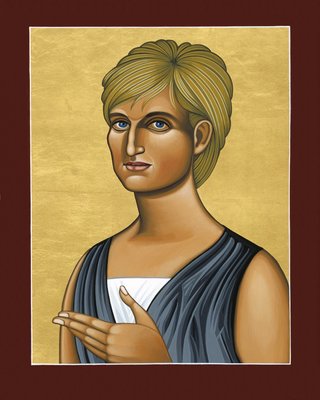 Princess Diana : The Queen of Hearts
31 August 1997. I was living in Albuquerque for that summer to finish a triptych on Jesuit Martyrs for Boston College because I really needed my teacher’s help. I had just completed the massive work and I was going back to Boston in a few days, when a friend called that night of August and said “Billy, quick, turn on the news Princess Diana has been in a car accident.” I was like most people interested in Diana and fond of her for visiting people with AIDS and single handedly changing the world’s attitude towards the disease. I did not think of her as a saint, but as an extremely important woman who had brought the royalty out of the palace and into the streets. As I watched the events for the next few days - nonstop - I found myself painting her image in much the same way I have read that people are gripped by a phenomenon called “automatic writing.” I know that sounds extreme but that’s about the only way I can describe what happened to me. I did not think, should I do this...or even with the little time I had left in Albuquerque, do I even have time to do this? I sat down to paint and it was done in about two days as I remember, and also done (as I was soon to learn) very very naively. I never intended to paint her as an icon but as a woman “moving toward iconic likeness.” Since I was used to painting in an icon style of course it came out that way, was that unconscious? Did I really think deep down her life merited being “pointed to” as exemplary? It was a picture of us all, in a way, paralyzed by our insecurities, faults, ecstatic moments, attempts to live in love, and yet it was a picture of a woman who was given an impossibly complicated public life that she could easily have squandered. A woman who modeled what royalty can be and do. A woman who was trying to break out of the gilded cage to find a personal love to support her. She chose, knowingly at great risk to her life, to take her fame into the care and concern for the sick, the homeless, victims of land mines, people with AIDS, and an endless list of others, and reach down, physically get down, for example, to meet children, eye to eye. No other image I have painted has been so criticized. I will not bother with telling you what has been said and written about this image, but I’m sure you can imagine. The thing is I was so absolutely unaware of that negative possibility when I was painting her. I poured in all the love I had, as I do with all the icons and images I paint. And because I think it came out so well I trust that- more than anything. If an image or something I paint comes out “alive” to me I am not swayed by even the harshest of criticism. And if I don’t like what I’ve done then it’s impossible to convince me otherwise.
Given this 20th Anniversary of her death I don’t think I have to tell you anything about her. More news than ever has been coming out about her life and legacy. Her sons are a living example of her inherent warmth and her concerns put into action. Did she change the world? In my estimation, yes she did. Am I aware of her struggles and the fierce criticism that still stalks her? Yes. Does it change my opinion of her extraordinary life? No. Do I wish we had someone of her selfless compassion in public life? Every single day. Am I glad I did this image now twenty years later ? Yes, and what I’d say to the critics now is, what are you doing that even comes close to what she did for people? As Daniel Berrigan used to say “I like my critics up close. I like to see what they are doing with their lives.” With her bouts of extreme depression it makes her ability to literally push herself out of the palace and into a hospital all the more heroic. I guess that’s the heroism I saw daily with so so many mothers in Ranchos de Taos when I lived there.
I was told by someone that Diana “ran into the St Therese story of her shower of roses” while visiting a Catholic Church and found her idea of help from heaven truly delightful. But I don’t know if that’s true. Her quotes though sound like she must have heard of Therese.
This is a very simple image, with Diana looking into you and raising a hand to help you as if to say :
“Nothing brings me more happiness than trying to help the most vulnerable people in society. It is a goal and an essential part of my life. A kind of destiny. Whoever is in distress can call on me. I will come running wherever they are.”
Princess Diana
Fr Bill McNichols
August 2017