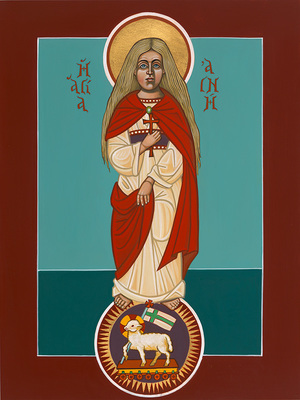 St Agnes of Rome
(b 291-martyred January 21, 304 AD)
“The end is not an event but a person.” GB Caird
When I was around age 5 I received a set of 4 small books called “Little Lives of the Saints” by Fr Daniel Lord, SJ. One of the first things I did when I entered theJesuit Novitiate in Florissant, Missouri on September 1st 1968, was to find Fr Lord’s grave and pray over it, thanking him for leading me to the saints. There is another indelible book, a novel, by Cardinal Nicholas Wiseman, called “Fabiola” originally published in 1854. It reimagined the lives of the early young martyrs including Agnes, Emerentiana , Sebastian, Tarcisius, and Pancratius.
When you’re 7 or 8, a twelve or thirteen year old is a teenager, when you’re that young they seem very mature and impressive! Now when I think of them they seem very young and vulnerable. Just days ago, a thirteen year old girl was kidnapped in Springfield, Massachusetts and luckily a couple paid attention to the amber alert and followed the car, going a hundred miles an hour, all the while calling the police.
Thank God, because of that couple she was released unharmed after 6 hours.
We hear of these stories way too often. Sadly, tragically, rarely do they have a happy ending. The child martyrs like Agnes and Pancratius inspired me during a rough childhood of bullying. I can’t imagine what it must be like now for kids who are bullied through Facebook, Instagram, Twitter, cell phones etc. I wonder if I’d have made it. So, in my childhood, I identified with the early martyrs and they were like my “imaginary friends” (see also the scholarly, very readable and brilliant book “The Cult of the Saints” by Peter Brown) who kept me alive and hoping. They taught me naturally, to pray by learning to talk with Jesus and His Mother, and our brothers and sisters, the saints. In this icon a young Agnes (whose name comes from the Latin, Agnus, which means lamb) is standing on a shining mandala. Inside is the martyred Lamb of God, standing on the Book of the Apocalypse (Revelation) with its seven seals, and the Lamb carries a green Cross of Victory. I love to speak in homilies, especially at funerals, comparing the vision of a powerful, frightening God in Isaiah 6, with the final scriptural vision of God in Revelation which is a Lamb. GB Caird taught me so much about the Lamb in his genius commentary “The Revelation of St John the (theologian) Divine” which I read with so much joy and interest when I was in my thirties as an art student at Pratt Institute in Brooklyn. Today you hear of a possible Apocalypse all the time. I would suggest Caird’s book, but also Craig Koester’s book “Revelation and the End of All Things.” But if you want, you can look at two brilliant very short videos on you tube by two young masterful teachers, who make short videos on every book of the Bible. They call themselves “the Bible Project.” I can’t say enough good about them. Agnes is patron of young girls, and there are so many centuries of beautiful paintings, statues or sculptures of her. She remains much beloved, through almost every century of Christianity; a sign of the Lamb of the Apocalypse, who conquers not by physical power but with the miraculous power of the Cross and this way of Love.
A blessed St Agnes Day !
Fr Bill McNichols - January 21, 2020