St Anthony and the Child 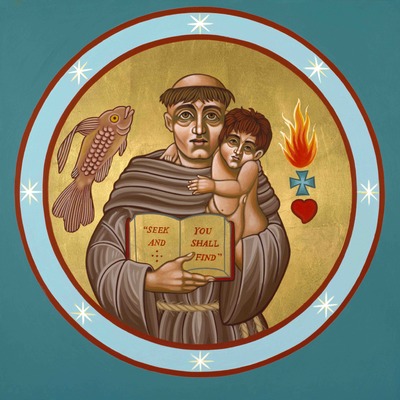 St Anthony and the Child
“Who are you, my dearest God ? And who am I, but your useless servant ?”
St Francis of Assisi
Through the intercession of my dear friend Fr Andre’ Cirino, OFM in Autumn of 1984, I was accepted into the Third Order of St Francis, which held its events, retreats and ceremonies in the Bronx, inside a small building called the “Little Portion” after the famous Porziuncola in Assisi. I still belong to this order and whenever I get mail from Andre’ it’s always addressed to William Hart McNichols, SFO. This was exactly at the same time of the “height” of my illustration career. After becoming a Third Order Franciscan, I was commissioned by a Franciscan pastor to illustrate a logo for St Anthony’s Parish in New Jersey. The pastor told me, “I want Anthony holding the Bible, as with all the earliest paintings of him, and that the legend of the apparition of the Christ Child came at least a century after Anthony ‘s death in 1231.” I looked into the paintings of Anthony and he was right; no Child. So, I decided to place symbols of the three cardinal virtues, Faith, Hope and Love in the drawing as well as a fish, which was from an account of one of the many miracles of Anthony. In one Italian city, his preaching was rejected by people and so he went to a stretch by the sea and began to preach. In response, the fish swam to the surface of the water, bobbing up and down listening to Anthony.
But I was loathe to take the Child from him because the male saints who hold the child (Joseph, Cajetan, Stanislaus Kostka...) are always loved and seen as safe; as kind and fatherly, or in Stanislaus case, an older brother. So, as I began to draw the logo I imagined taking the Child from him, and, as with any infant or child who loves the person holding them He began to howl and cry. So the drawing turned out with Jesus clinging to Anthony. When I delivered the logo and told the pastor that I tried but the Child cried and held on for dear life. He shook his head with a look of slight disapproval and wry amusement, but he accepted the logo.
Because of this experience, I wrote a poem, and when I was asked to write my first icon of Anthony, I used the same drawing.
St Anthony and the Child
In the beginning
Anthony held only
the Bible,
and taught with
the other hand
uplifted.
Artists simply assumed
his proclamation
of the Gospels
was best shown
literally
with book in hand .
But somehow
the Child
envisioned another
revelation of the word
that night
He crept into
Anthony’s arms.
(1980’s New York City)
Happy Feast of St Anthony ! 👶🏻 13 June 2022