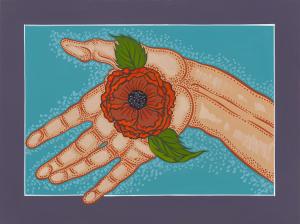 St Francis Flowering Wound
“I’ll hold out my hand and
my heart will be in it ...”
(From the song “For All We Know”
By J. Coots and Sam M. Lewis 1934)
On August 15, 1224, Francis of Assisi traveled some 90 miles north of Assisi to bemoan his sins, and how much he felt his mission with his young order, the Friars Minor... had dramatically failed. The poor man who would not accept any lavish gifts had accepted a mountain, Mt. La Verna, from Count Orlando Chiusi della Verna. So he and Friar Leo slowly made their way up the great mesa, and he instructed Friar Leo to keep watch, as Francis wanted complete privacy to be with his Most High Lord. Somewhere in the middle of September, (the feast of the Stigmata used to be celebrated on September 17, the same day as St Hildegard’s day) St Francis received a vision no one has ever seen before or since. He had asked two graces of Jesus, so he could experience everything possible of what it meant to follow Jesus...literally. (0ften when I introduce the depth of St Francis’ life, I’ll say he was the only true fundamentalist Christian that ever lived) the two final graces he asked for were :
To know and experience the pain of Jesus Crucified and
To know the love of Jesus , and how He could forgive from the horrifying pain of the Cross ?
The answer to his two petitions was the appearance of the Crucified and Seraphic Christ, who left Francis with the five wounds. And so now Francis felt the pain of the Crucifixion and the seraphic love that was “forgiveness incarnate.”
I refer you all to “The Five Considerations On The Stigmata,” said to be one of the most beautiful writings in all of Italian literature. It is available on the internet. I know when you read it you’ll see why it has kept this reputation for centuries. The image I’m presenting for Francis’ feast was originally a drawing for a flyer advertising a play about the Stigmata around 1984. This play was put together by Roberta Nobleman and I can still see a woman named Dolly, who played the Seraphic Christ, as she gently flew across the stage towards Francis with loving intention in her eyes.
The image is simply Francis’ hand with the wound flowering. The flower signifies how Francis’ blood healed
many sick animals and people during the last two years of his life; he died at sunset on October 3, 1226. Wounds can make us either bitter or compassionate. It takes a long time to grow from bitter to compassionate , but we have so many living examples of women and men who have managed this task. We all have people we admire who have shared with us their lives of continual growth. I wonder, especially today in these tragically divided times if I, if you, if all of us can begin to learn to use our wounds to heal one another?
“Dear Lord Our God,
You renewed the marks of the suffering of your Son in the body of our holy Father Francis in order to inflame our hearts with the fire of your love. Teach us always to glory in the Cross of Our Lord Jesus Christ.
Amen “
Sunset: October 3, 2018
Fr Bill McNichols