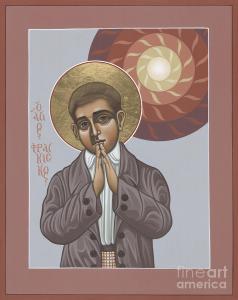 St Francisco Marto: "O Milagre de Fatima do Sol"
"I have declared from the beginning the former things; they went forth from my mouth and I made them known; then suddenly I did them, and they came to pass, says the Lord. Because I knew that you were obstinate, your neck was an iron sinew and your brow was brass. Therefore I have declared things to come to you from of old; before they came to pass I announced them to you, so that you could not say, my idol has done them, and my graven image have commanded them...they are called into being now by the prophetic word...” Isaiah 48:3-7
My cousin Kathi Hart-Cooper and I became close around the time of her first communion October 28 1955. My Mom bought me a statue of Our Blessed Mother to give her as a present, but it was really because Mom had given me (her maiden name) the middle name of Hart that bonded us and we both felt we were more than cousins; I felt I was part Hart. It turns out we would talk almost everyday on the phone from that day until we graduated from high school. These were the days of a hand held phone with the cord running under your room so that both parents knew you were on the phone. And both Kathi and my parents used to say things like "What on earth do you have to say! You just talked yesterday or an hour ago!” We had no idea that we were learning to speak about and process our feelings. I think it kept us both sane through the traumatic years of grade school and high school. In those years I was being bullied continually (up until junior year in high school with an oasis in seventh and eight grade because we moved to a new school). Kathi had and has such a terrific sense of humor she could always make me laugh! I turned quite naturally (for guidance and help) to the child Martyrs of the Roman persecutions and to children like Jacinta and Francisco Marto who were victims of great persecution after they began to see Our Lady of Fatima beginning May 13, 1917. Kathi named her first son Geoff and her second son Billy, after me. This created another bond and Billy asked me to be his Confirmation sponsor, and so I painted/wrote him an icon of St Francisco Marto.
You can google the story of Fatima or rent a movie to see and hear the whole set of miraculous events. Before October of 1917 Our Lady told the children that on October 13 there would be a sign that no one could doubt and that St Joseph would come and bring peace. This is the source of the colors and symbolism of the icon “St Joseph Shadow of the Father.” When Joseph did appear in the sky that day he and the child were both wearing red and I have the child holding a dove (Holy Spirit) of Peace.
Over 40,000 to 100,000 people came to Fatima that day to witness a sign or mock the children if nothing happened. Around noon time it was raining, a cold front filled with freezing rain had moved across the continents from Siberia (this is better explained in Chris Summa’s film "The Boy Who Found Gold”) and it was cold and muddy. The people were getting so angry that the children had to be guarded by the police. Suddenly Lucia (one of the three children) pointed to the sky...
"As if like a bolt from the blue, the clouds were wrenched apart, and the sun at its zenith appeared in all its splendor. It began to revolve vertiginously on its axis, like the most magnificent fire wheel that could be imagined, taking on all colors of the rainbow and sending forth multicolored flashes of light, producing the most astounding effect. This sublime and incomparable spectacle, which was repeated three distinct times, lasted about ten minutes. The immense multitude overcome by the evidence of such a tremendous prodigy, threw themselves on their knees.” Dr Manuel Formigao.
The sun suddenly came hurtling toward the people, and then just before it hit the earth, went back up into the sky. At that moment everyone thoroughly drenched by the rain, discovered instantly they were dry, and safe.
What was the sign of the falling sun about? Some have guessed a warning about a nuclear holocaust as experienced later in Hiroshima and Nagasaki...or one yet to come. Some have thought it was more like a falling meteorite, and some have no idea, but consider it serious enough to ponder with petitionary prayer.
"O clement, O loving, O sweet Virgin Mary, Queen of the Rosary of Fatima!
Grant that we may follow the example of Blessed Francisco and Blessed Jacinta, and of all who devote themselves to proclaiming the Gospel.
Thus we will follow all paths and everywhere make our pilgrim way; we will tear down all walls and cross every frontier, as we go to every periphery, to make known God’s justice and peace. In the joy of the Gospel, we will be the church robed in white, the whiteness washed in the blood of the Lamb, blood that today too is shed in the wars tearing our world apart. And so we will be, like you, an image of a column of light that illumines the ways of the world, making God known to all, making known to all that God exists, that God dwells in the midst of his people, yesterday, today and for all eternity...”
From Pope Francis prayer at Fatima -
12 May 2017
Pope Francis canonized Jacinta and
Francisco the next day, May 13.
Fr Bill McNichols for October 13, 2017