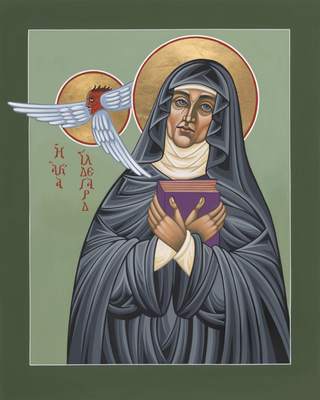 St Hildegard of Bingen : Doctor of the Church (1098-1179)
“Holy Spirit, you, quickening life, prime mover of the universe and root of all creation, cleanse your creation from impurity, heal the guilt and anoint the wounds. O radiant life, worthy of praise, awaken and reawaken the universe!”
St Hildegard
I have this little book of prayers of Hildegard with my teacher’s (Friar Robert Lentz, OFM) masterful icon on the cover, published by Franciscan Media, 1989.
They have been gathered by the former prioress for 23 years, of St Hildegard’s Abbey, in Rudesheim-Eibingen, Germany, Cecilia Bonn, OSB. I noticed that looking through them, I could have chosen just about any prayer and it would speak to us today. Such is the power of Hildegard’s connection to God. I could go into so many things about my relationship to her dating back to the first cassette of her songs I received as a gift in 1986. But let me send you to a few living experts and scholars, who will help you to find her on your own. My favorites:
“Voice of the Living Light : Hildegard of Bingen” edited by Barbara Newman, 1998
“Vision : The Life and Music of Hildegard von Bingen” 1995
By Barbara Newman and commentary on her visions by Fr Matthew Fox
“Vision : The Music of Hildegard von Bingen” CD, 1995
And once again ...
“Vision : From the Life of Hildegard von Bingen” Zeitgeist Films, 2009
Margarethe von Trotta’s beautiful film using Hildegard’s actual words for the bulk of the film and starring the unforgettable Barbara Sukowa.
I watched that film over 10 times mostly when I was recovering from my heart collapse in 2012. It became so familiar that I no longer had to look at the subtitles anymore. As I write this on the Thursday evening before Hildegard’s feast, the 17th of September, the next day, “demonstrations” are planned round the country in support of the people who stormed the United States Capitol and wounded over 100 Capitol police on January 6. I have heard the best recreation of that day, is a 40 minute film called “Inside the Capitol Riot : An Exclusive Video Investigation.” After my work in the AIDS Hospice in New York (83-90) I couldn’t watch any movies about AIDS. And I haven’t been able to watch the video investigation of the violent riot for the same reasons.
When I got this commission to paint/write Hildegard’s icon (around 2005?) I chose an image of her own painting, from her book, “Scivias,” called “The Zeal of God.” I’ll let Fr Fox, an Episcopal Priest, now tell you about the image, though I did not include the walls, just the fiery angelic head.
“...Where the two walls meet, there is a ‘zealous red head.’ Hildegard describes this head as having ‘a fiery color, shining red like a flame of fire. It had a terrifying face.’ It had three wings ‘of amazing breadth and length which were white as a shining cloud’ and these wings grew larger as they beat and beat. The head itself did not speak and did not move. Christ, however, spoke. ‘This head signifies the zeal of the Lord,’ Hildegard says. The Zeal of God is essentially justice-making; it comes about when we are aroused by injustice. ‘In mirror (that is speculative) knowledge and in human work there is a common boundary of injustice,’ Hildegard tells us. God cares so much for justice that in the past, under the Old Law of Abraham and Moses as well as in the present, under the New Law of Christ, the divine zeal always and continues to be for justice.” One of my favorite (almost impossibly rational at this time) speakers, Beau of the Fifth Column, always ends his videos with “Just a thought.”
“O Shepherd of souls,
O first Word, through which we were all created, may it truly please you, to free us of our misery and from our brokenness.”
Doctor St Hildegard
16 September 2021