St Ignatius At Prayer In Rome 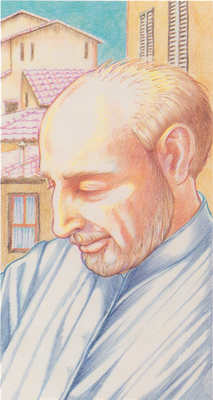 St Ignatius At Prayer In Rome (illustration from 1991)
“I will ask for what I want: here I ask for interior knowledge of the Lord ... Take,
Lord receive all my liberty, my memory, my intellect, and all my will - all that I have and possess. You gave it all to me; to you Lord I give it all back. All is yours, dispose of it entirely according to your will. Give me the grace to love you, for that is enough for me.”
St Ignatius Loyola - from his
Spiritual Exercises: Contemplation for attaining love
“...finding
God
in agony
first but then
in
stars by night
and
later at day
in
a blade of grass
an orange leaf
he began his
mornings with
‘What shall we
do
for God today ?’
letting the Spirit
blow
through his soul
as
wind through
a
field of poppies...”
Fr James Janda
In the year 1991, the Society of Jesus and the world celebrated the 600th anniversary of the birth in 1491 of the Basque saint, Inigo de Loyola. Archbishop (now Cardinal) Stafford of the Archdiocese of Denver, wanted to make a holy card to give to all the people of the Archdiocese. He had seen this drawing I did of Ignatius praying in Rome and asked me if he could use it. During my first two years as a Jesuit, 1968-70, I heard the often repeated Jesuit “in joke” about an older Jesuit on his death bed struggling mightily with anxiety and terror. A fellow Jesuit nearby, attending the dying man, assured him that God was all forgiving and he had nothing to fear. Then the old man says, “It’s not God I’m afraid of, it’s St Ignatius !” That joke hit me hard in my heart, and oddly, very personally, as if my own father was being terribly misunderstood . I swore then, as a 20 year old boy, that I would try to do everything possible to show the many sides of Ignatius. Throughout the years I began to draw him in my career as an illustrator, and then as an iconographer. Tonight on the eve of his feast, I stepped outside and looked into the beautiful glowing moon and felt his love and spoke my love back to him. I have felt like he’s my “second Dad” since I began to know him more intimately in 1968. So many Jesuits during the 35 years I was an official member, taught me about him through their writings, retreats and most of all their genuine guidance and faithful love. And they still do. One thing I’ve learned from Ignatius’ daily Examen, or examination of conscience, is that you can always, always, begin again. The great mystic Adrienne von Speyr said of her heavenly mentor, “No one points to God with such shrewd intelligence, as St Ignatius.” I am constantly amazed and thankful that he is still with me. He continually challenges me to “find God in all things and people.” My favorite writings are his Spiritual Diaries. There, his love for God flows out along with his inability to stop the tears of love he felt, most of all before, during and after celebrating the Holy Eucharist.
Holy Father Ignatius,
Please keep leading me to that knowledge of God
that animated every moment of your life.
Teach me daily, to say with you,
“What shall we do for God today ?”
Then let me use every gift from God to
answer that question.
Help us all to navigate these awfully
anxious, seemingly endless times of this present pandemic.
Dear Holy Father Ignatius,
I love you.
Amen
Fr Bill McNichols