St Joan of Arc and St Michael the Archangel 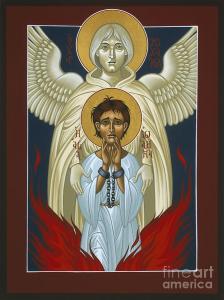 St Joan of Arc and St Michael the Archangel
“Life isn’t about finding yourself.
Life is about creating yourself.”
George Bernard Shaw
St Joan of Arc was burned at the stake on the morning of May 30 1431. She was nineteen years old. In Mary Gordon’s book on Joan she keeps referring to her as a teenager and continually makes you aware of how incredible her accomplishments were, for a girl or boy of that age. Mark Twain claims next to Jesus Christ, Joan is the most extraordinary person who ever lived. People have been mystified and have fallen in love with Joan for centuries. At this moment Bernard Shaw’s play St Joan is enjoying a very successful revival on Broadway with Candola Rashad playing Joan. As a child I saw Jean Seaburg on tv in the role, and when I lived in New York I saw Lyn Redgrave. Most recently the Parkland School survivor, Emma Gonzalez’ strong, beautiful and vulnerable face has been compared (in a New Yorker article) to Maria Falconetti who played Joan in Carl Dryer’s 1928 silent film classic, “The Passion of Joan of Arc.” This unforgettable film experience is still available on dvd in the Criterion Collection of great films. When I first saw the film as a theology student in Cambridge, Massachusetts, I remember hearing that Maria Falconetti dove so far into her portrayal of Joan that she never came back. When you see the film that’s very painfully obvious. When I was 11 years old I received a 18 inch plaster statue of Joan that I used to look at with wonder; she was a teenager which to an 11 year old seemed very mature and her facial expression was sure and strong. All through my life Joan has reappeared and it would take me forever to recount all the incidences but I’d like to name just a few. In 1971 I was a philosophy student in St. Louis about to move to Boston, where I simultaneously attended Boston University for art and Boston College for philosophy when I heard on a record, Judy Collins live concert in Central Park. The opening song was Leonard Cohen’s song “Joan of Arc.” Collins version from that concert is still my favorite. It was so hypnotic and haunting that it “set me onto a finding Joan adventure” which has never really ended. When I began painting icons I was commissioned in 1993, to paint Joan and St Michael, for St Michael’s Church in Bedford, Massachusetts. This is the icon you see now. Another dramatic encounter with Joan was reading Adrienne von Speyr’s intimate portrait of Joan in her “Book Of All Saints.” If I could, I’d quote the entire piece, it is so revealing, and like so much of Adrienne’s writings, brings you into a prayer and dialogue with Joan. Finally when I had my heart collapse on April 27, 2012, I came out of the induced coma on May 11th. I was still fairly delirious from the nine drugs in me but I remember when I found out it was May, instead of thinking naturally, it was the month of the Blessed Mother, I thought of Joan. My sister Mary was reading to me from the newly published book “The Maid and the Queen” by Nancy Goldstone. Then, when I could read myself I re-read “The Trial Of Rehabilitation” published by Ignatius Press. The trial has many of Joan’s childhood friends, who at that time were in their 40’s , reminiscing about the strong-willed, holy girl they knew.
This year, it’s impossible for me to think of Joan without begging her to guide and lead into the future, the students like the Parkland Survivors, who are, I believe, are acting with inspired Wisdom. We adults seem to have become too numb and too hopeless to do anything but talk or preach “an eye for an eye...” But these young children with their valiant attempts to awaken us all to the violence and senseless shootings (which now have been occurring nearly once a week) continue to create Holy Hope.
I began with a witty quote from Bernard Shaw about creating yourself, which has some valuable truth in it.
What I really believe, is that if we are humble enough to be pliable in God’s hands, letting God continually mold and create us, each one of us becomes the absolutely unique beings we were always meant from eternity to be.
St Joan lead us and our youth, into God, who alone can give us life now and everlasting life to come!
Fr Bill McNichols
30 May 2018