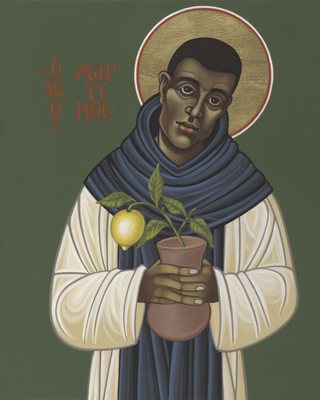 St Martin de Porres : Patron of All Those Seeking Racial Harmony, Mixed Race People, Public Health Workers, and more, Barbers and Innkeepers (9 December 1579-3 November 1639)
“Truly, truly I tell you, the one who believes in me will do the same things that I am doing. You will do even greater things, now that I am going back to the Father.” St. John 14:12
“And in the end, the love you take is equal to the love you make.”
Lennon and McCartney
“Martin de Porres Velázquez, O.P., was a Peruvian lay brother of the Dominican Order who was beatified in 1837 by Pope Gregory XVI and canonized by St John XXIII In 1962. He is the patron saint of mixed-race people, barbers, innkeepers, public health workers, and all those seeking racial harmony.”
Wikipedia
There are no accidents with God. Also, at the same time, He can and will, bring good even out of terrible evil. Imagine my surprise and incredible joy, when I realized Election Day this year, is on the feastday of St Martin de Porres. This icon came out of an unusual request; that I paint St Martin on the door of a medicine cabinet. The commissioner shipped the small door to me up in Taos and I began to read the beautiful 1963 biography of Martin, by Giuliana Cavallini, which in Italian had been called, “I Fioretti del Beato Martino” (The Little Flowers of Blessed Martin).
The author tells us she “...added to the original Preface only the hope that these Fioretti, crossing the frontiers of the land where they blossomed, may carry to the vast world the sweet odor of sanctity of Martin de Porres and inspire in souls a love for the beauty of a holy life. May they contribute in their own small way to the revitalization of the Mystical Body of Christ which Pope John XXIII earnestly desired as a result of the Ecumenical Council, as he stated in his solemn address at the canonization of Martin de Porres...These Fioretti are neither a chronological nor a critical story of the life of Martin de Porres. They are episodes taken from the testimony given during the process of his beatification. The persons who gave the testimony had known Martín during his lifetime and they were asked to state under oath what they knew about him. It is certain, therefore, that these witnesses faithfully presented the facts as they knew them. The events were too extraordinary to be forgotten, especially since so little time had elapsed since they happened...
It was about nine o’clock at night, November 3, 1639, when, without a tremor, without a sound, Martin’s soul left the body which had been such a docile and heroic instrument of virtue, and entered the kingdom of eternal happiness.”
Giuliana Cavallini
Martin lived in the city of Lima at the same time as two other Dominican saints, St John Macias, and St Rose of Lima. Among many other incredible miraculous things continually happening around Rose, was that her garden of roses bloomed year round. St Martin had the same blessing with his lemon tree, and so I have him holding a lemon sprig. He’s just about to give it to you; a simple sign of his extravagantly giving nature. As with the miracle working saints, (and many, many saints worked no miracles while they were alive) the tragedies of our expulsion from the Garden of Eden, seemed to be lifted as they made that Garden of Paradise bloom again and again- not against nature but with our original nature. Now, those who know me well, might be expecting me to quote one of my favorite composers and musicians, Joni Mitchell chanting in her dirge called “Woodstock,” that “...we’ve got to get ourselves back to the garden.” It’s been fascinating to read that although Joni is extremely allergic to any organized religion, she has had from the beginning of her composing career, been drawn back and back to the story and effects of the expulsion from the garden in the Judeo-Christian Biblical account in the Book of Genesis. So much so, that she caused me to think deeper about this tragedy ( as well as our “new Joan of Arc” - Greta Thunberg ) and how can I (we) help ?
All these racial, environmental, divisive divisive divisive problems we are now living with - some that began centuries ago, some awfully recent, are pleading with us to listen to the disguised Divine Gardener Mary Magdalen encountered on that first Easter morning. Scripture begins with us in the Garden, goes through Enclosed Garden images in the Song of Songs,etc., and ends in the Apocalypse or Revelation with us back in the beautiful transformed/transfigured Garden.
“Then he showed me the river of the water of life, bright as crystal, flowing from the throne of God and of the Lamb through the middle of the street of the city; also, on either side of the river, the Tree of Life with its twelve kinds of fruit, yielding its fruit each month; and the leaves of the tree were for
the healing of nations.
There shall be no more, anything, accursed, but the throne of God and the Lamb shall be in it, and his servants shall worship him; they shall see his face, and his name shall be written on their foreheads. And night shall be no more; they need no light of lamp or sun, for the Lord God will be their light, and they shall reign
forever and ever...
The Spirit and the Bride say, ‘Come.’ And let them who hear say, ‘Come.’ And let they who are thirsty come, let they who desire, take the water of life.......without price.”
Revelation 22: 1-3, 17
Fr Bill McNichols 💮 October 2020