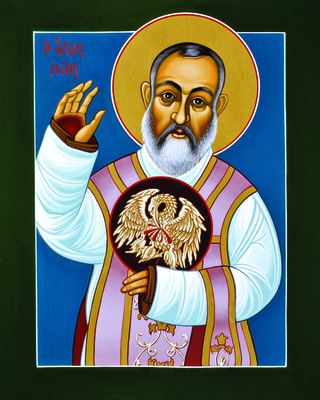 St Padre Pio : Mother Pelican (25 May 1887 - 23 September 1968)
“We should not forget that the saints are, first of all, masterpieces of grace, so that at times, in addition to imitating the example they leave for us, we should admire the extraordinary plan of God in them, completely unique and unrepeatable... in 1916, San Giovanni Rotondo had absolutely nothing to recommend it. It was a very poor little town, like so many of the out of the way towns of the Italian South...It was here Padre Pio arrived on July 28, 1916, in the company of the superior, almost as if for a break of a few days, to get away from the sweltering heat of Foggia...He was happy to be there, and the friars were happy to have him. But the arrangement was not to everyone’s liking. Deep within, Padre Pio was subjected to a tremendous battle. He felt ‘exposed to the fury of Satan”, who surely did not want to see him in that place. The Padre felt assaulted by temptations against the faith that were so strong that he was prompted to write, ‘What a mystery I am to myself!’ So sure of guiding souls, he felt then, as he always did thereafter, so weak and uncertain when it came to his own person.”
Fr Gabriele Amorth ( 1 May 1925 - 16 September 2016 )
from his book, “Padre Pio : Stories and Memories of My Mentor and Friend”
We all have mentors, teachers and friends in our lives who can make a world of difference in how we see ourselves and give us the confidence to reach for the stars. I see the saints that way too. So I’m going to share a bit about one of mine, Padre Pio. Another mentor has been Adrienne von Speyr, (whose guide was St Ignatius Loyola) whom I remember clearly saying something like, “the saints are especially available around their feasts.” Now, “Padre Pio season” is not until September, but around my 73rd birthday, I felt his wanting me to come closer to him. I was actually trying to find a book for two friends about him, when I ended up buying 3 and realizing one was for me. It’s one I hadn’t read by the famous Vatican Exorcist and friend of Padre Pio, Fr Gabriele Amorth. I feel a sort of urgency to get this out so I cannot possibly go into all my Padre Pio stories, but I can clearly remember the first. When we had to move into the Governor’s Mansion, (gifted to the state of Colorado by the Boettcher Foundation built in 1908) my room was a former linen closet and had a balcony overlooking Logan street in Denver. It was to say the least, a magical mansion with 27 rooms and art from all over the world . That “house” fueled, ignited, my nascent imagination. I was eleven and turned 12 not long after. I loved looking out over Logan street, a one way street, and watching the cars at night. A few blocks away, on Broadway street, was a Catholic Book Store, called Daleidens. I could walk down there and look into the books. One day I saw a book about Padre Pio and it had pictures of him showing his wounds. This actually really scared me, as he was still alive and suffering, but those pictures were seared into my memory and imagination. I don’t know when I discovered the female image of Jesus the Mother Pelican, but found out it was a medieval legend that when the chick’s of a Mother Pelican we’re starving, she would cut open her breast and feed them with her own blood. Later as an iconographer, I would see Padre Pio as that Mother Pelican. After I was finished writing the icon (1994?) I wondered if he approved? So I got a VHS cassette of his last Mass, and on the back of his chasuble, was the Mother Pelican. And also, providentially, in 1979, I was ordained on his birthday. What a gratuitous gift!
When I finished the book by Fr Amorth, I began to listen on audible, to a great book by Renzo Allegri, “St Padre Pio : Man of Hope.” Along with the first book I ever read on him by the Lutheran author, Bernard Ruffin, I think you’ll really get deeply moved by this book. It shows all sides of Padre Pio; his serious, angry, hilariously humorous, practical, clairvoyant ,deeply compassionate, and unspeakably holy side. But just about any of the many books on him will bring his presence into your home; (I confidently warn you 😊) without a doubt. In fact, be sure if you’re reading this, that he’s on his way to you too.
After encountering Ruffin’s book I was so entranced that I depended upon him during my years as an AIDS Hospice Chaplain, and never was disappointed. I began to discover the many biographies of Padre, and read as many as possible. With each one, I felt his presence. Right now so many of us are feeling overwhelmed by the staggering list of what’s happening to us and to all on this planet today, that I offer you a sincerely loving guide, Padre Pio, a man of hope, a literal “Bridge Over Troubled Waters” who in his own words, was a “mystery to himself.”
“O Loving Pelican! O Jesus Lord! Unclean am I but cleanse me in Your Blood.”
St Thomas Aquinas
“I will ask the Lord to let me remain at the threshold of Paradise, and will not enter until the last of my spiritual children has entered...Once I take a soul on, I also take on his (her) entire family as my spiritual children.”
St Padre Pio
Fr William Hart Dominic McNichols 💮 July 2022 (... around the time he moved to San Giovanni Rotondo)