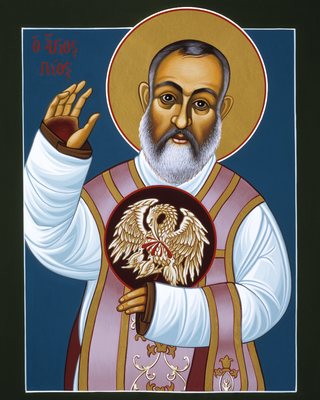 St. Padre Pio : Mother Pelican (25 May 1887-23 September 1968)
“ O Loving Pelican! O Jesus Lord! Unclean am I but cleanse me in Your Blood!”
St. Thomas Aquinas
So many medieval and early Renaissance artists such as Beato Fra Angelico, painted the symbol of Christ as Mother Pelican nested above Crosses or on tabernacle doors. I once saw a giant floor mosaic in a Brooklyn church ( I think it was St Peter’s Church ?) of Her on the sanctuary floor which really moved me. There exists an early legend that if the Mother Pelican had no food for her chicks she would tear open her own side to feed them. This naturally became a symbol of Christ, and for me, a symbol of all the holy women and men who were given the stigmata; they became Christ figures. These saints healed, performed miracles from God, and spiritually fed us with their blood or wounds ... and continue to do so from Heaven. So I decided to put the painted disc of the Mother Pelican in Padre Pio’s hand, and I wondered if he would approve ? Just before I finished the icon I watched a video cassette (early 90’s!) of his last Mass on 22 September 1968. At the end of the Mass he was so weak that he had to have assistance in walking. And, as he turned to leave, I saw the Mother Pelican on the back of his chasuble.
St. John Paul II once made a visit to San Giovanni Rotondo, Foggia, Italy, and Padre Pio prophesied that one day he would be Pope. He was canonized by Pope John Paul on 16 June 2002. I have read so many books about him, and there are luckily so many to read, and my favorite is by C. Bernard Ruffin, a Lutheran Pastor, who died just last May 4th in Virginia. It’s called “Padre Pio : The True Story,” 1991, Our Sunday Visitor Publishing Company, they now publish a revised, expanded 3rd addition. When you read almost anything about Padre Pio, you cannot feel any distance from him. It’s as though he comes to you immediately. I continue to beg him for help with the most extreme sufferings of friends and anyone who asks me for prayers. His presence in your home is often accompanied by a strong aroma of flowers and other pleasing scents. If you need him, all you have to do, is ask him to be one of his spiritual children, and he never refuses anyone. Now for a couple of his quotes:
“Pray, hope, and don’t worry. Worry is useless. God is merciful and will hear our prayers... I will ask the Lord to to let me remain at the threshold of Paradise, and I will not enter until the last of my spiritual children has entered...once I take a soul on, I also take on his (her) entire family as my spiritual children.”
St Padre Pio
For 25 May 2020 ... the 41st Anniversary of my ordination in 1979 at the Basilica of the Immaculate Conception, Denver, Colorado.
Dearest friend and father, Padre Pio, who bore the wounds of Jesus Christ for 50 years. Pray, for us, dear Padre, especially now in this time of the world wide pandemic !
Amen
Fr Bill McNichols