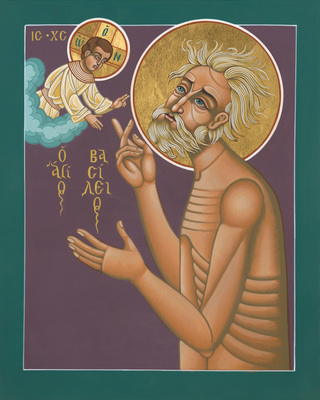 St Vasily the Holy Fool of Moscow (feast day 2 August)
“If anyone among you seems to be wise in this age, let him become a fool.”
1 Corinthians 3:18
In these days with Russia and Ukraine continually in the news, I turn to a woman like the incredibly courageous Marina Osvyannikova who was “foolish” enough to risk everything for the truth. In this way, she follows in the ancient footsteps of the men and women Holy Fools of Russia. Few people know that the gorgeous church we always see on the news in Moscow, is named for St Vasily (Basil in English) the Holy Fool.
No one could ever get away with castigating the Tsar without being murdered, except Vasily. I am presently painting/writing an Icon of St Marina (Margaret in English) as a prayer for the brave Marina Osvyannikova. I am copying an old Bulgarian icon of this ancient great Martyr, who happened to also appear to the brave young St Joan of Arc, along with St Michael the Archangel and St Catherine of Alexandria.
St Vasily, the Russian Orthodox saint, is also known as ‘yurodivy’ or holy fool for Christ.
He was born of serfs in a village near Moscow in December 1468. Legends say he was born on the portico of the local church. As a young apprentice shoemaker, he became incensed at the Russian government’s carelessness and disregard, especially towards the poor and sick. He was known for mocking the Tsar, then Ivan the Terrible, to provoke change and ran naked through Moscow’s snow filled streets, weighed down with chains.
The Tsar and high-ranking government officials tried to cajole Vasily with gifts, to silence him, but he gave everything away to those in need. He was clairvoyant and often warned people of their future tragedies, to beg them to become humble before God. Upon his death, August 2 1557, the humiliated Ivan the Terrible served as his pall bearer and then commissioned the magnificent church of St Vasily (St Basil) in Red Square. This is the Church that you see almost every night on the news, with the glorious multi-colored domes of the Holy Spirit’s tongues of fire, that we’ve learned to call “onion domes.”
I suppose that the closest thing we have to Holy Fools in the western church would be St Francis of Assisi and especially his most memorable foolish Friars, Brother Juniper and Brother John the Simple, or one of my favorite saints, St Benedict Joseph Labre.
Troparion for the feast of St Vasily the Holy Fool of Moscow:
“Your life, O Basil (Vasily) was true and your chastity undefiled/ In fasting, vigilance and exposure to heat and frost/You subdued your flesh for the sake of Christ/ Therefore your countenance shone with the brilliance of the sun./Today the faithful glorify your Holy falling-asleep./ Implore Christ to deliver us from all bondage, dissension and war./ And to grant mercy to our souls...
And dear Courageous Vasily, encourage all of us to be brave in our telling the truth; especially those like Marina and all the other Russians who risk their lives by speaking against this tragic war. In the name of Our Lord Jesus who truthfully told us “I am the Way, the Truth and the Life.” (John 14:6)
Amen
Fr William Hart Dominic McNichols 🗣 for April Fool’s Day 2022