The Black Madonna - Your Lap Has Become the Holy Table 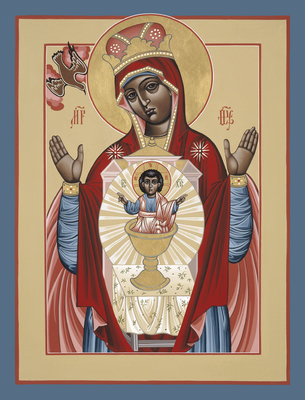 The Black Madonna : Your Lap Has Become the Holy Table
“Ave, ave, verum Corpus, natum de Maria Virgine, vere passum, immolatum in Cruce pro homine; cuius latus perforatum unda fluxit sanguine. Esto nobis praegustatum in mortis examine. O dulcis, O pie, O Jesu Fili Mariae, misererere mei. Amen “
Wolfgang Amadeus Mozart 1791
“While preparing the altar, after I had vested, and during Mass, I experienced great interior impulses, and wept very copiously and intensely, sobbing violently. Often I could not speak. The same continued after Mass. During much of this time, before, during, and after Mass, I felt and saw clearly that Our Lady was very propitious, pleading before the Father. Indeed during the prayers to the Father and the Son, and at His consecration, I could not but feel or see her, as though she were part or rather portal of the grace that I could feel in my spirit. At the consecration she showed that her own flesh was in that of her Son, with so many intuitions that they could not be written.”
St Ignatius “Spiritual Diary,” 15 February 1544
In 1990 before I left New York City to begin my apprenticeship in Albuquerque, I went to Rizzoli Book Store in SoHo to find a book about icons. They had one; “Russian Icons” by Fr Vladimir Ivanov, 1987. From that one book I found and copied at least 7 prototypes of icons:
Jesus Christ Redeemer Holy Silence, Our Lady of the Sandias (the Kykko Icon), the Savior of the Fiery Eye, the Virgin of the Don, the Holy Face (the Mandylion), Mother of God Similar to Fire, and this Eucharistic Icon, Your Lap Has Become the Holy Table.
This was commissioned by my first real “patron” Fr Ray Bucko, SJ for the Jesuit Villa Chapel In Cazenovia, New York. Ray was one of the first Jesuits to post on the internet and began to feature my icons. I remember living in the Jesuit Community on 98th and Broadway, later, in 1997, when one of the community members came into dinner one evening and said wryly, “Well, I delved into “Society of Jesus” on the internet and what came up was St Ignatius, Fr Pedro Arrupe, and ... you !” Everybody laughed, and me too...nervously. Ray also commissioned the triptych of the Passion, Jesus Christ Extreme Humility, Our Lady of Sorrows and St John the Apostle. I’m forever grateful to him.
In 1994 Pope St John Paul designated the Year 2000 as a Eucharistic Year, following the 3 years he dedicated to the Trinity, 1997, 98, 99 (see the Apostolic Letter, “Tertio Millenio Adveniente” 10 November 1994) . So naturally I wanted to find an icon that celebrated that Eucharistic Year. I found this 19th century Russian Icon which featured a Black Madonna, a black Child Jesus and a black-brown, Holy Spirit. It shows Mary’s womb as the Tabernacle and the Child arising from the chalice, and a brown Holy Spirit. My teacher told me the table represents the Father, as the ground of all being. Since that time I’ve seen several renditions of this icon, but none of them portrayed the Mother of God, the Child and the Holy Spirit as black or brown. This led me to two remarkable and instructive books about black Madonnas throughout history; “Longing For Darkness” by China Galland, and “The Cult of the Black Virgin” by Ean Begg. I would recommend both, especially today, because I remember Ean Begg saying that this “darkness” of the Black Madonna, is the darkness of pregnancy and not the darkness of depression or despair. I often think about this every Advent, which is the darkest time of the year. My experience is that people really need images and words of hope, now, more than ever. I'm working on an icon now of Sister Thea Bowman and feel inspired by the 19th century icon, to use the brown Holy Spirit again.
The entry from 1544, in Ignatius’ Spiritual Diary, is so profound, that I’ll try to write about it as we move closer to his coming feast day. And I’ve always loved some of the old hymns concerning the Eucharist, like Pange Lingua Gloriosi , Adoro Te Devote, and especially Mozart’s setting of Ave Verum Corpus, a motet he composed for Corpus Christi Sunday, dated 17 June 1791. I’ve quoted the Latin and will finish with the musical /prayer translation. I don’t think anyone can listen to this Mozart motet without being moved by the hushed, utterly reverent and then strong, beautiful setting:
“All hail, O true Body, of the Blessed Virgin born, which in anguish to redeem us did suffer upon the Cross; from whose side, when pierced by a spear, there came forth both water and blood. Be to us at our last hour the source of consolation. O loving, O holy, O Jesus, Son of Mary, have mercy on me. Amen “
Fr William Hart Dominic McNichols 💮 July 2022