The Kenosis -self-emptying- of St Bernadette of Lourdes 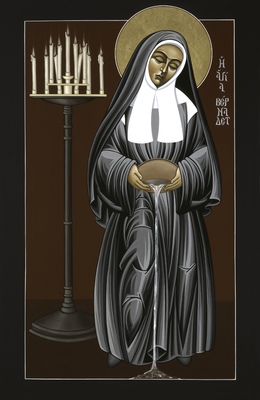 The Kenosis (self-emptying) of St Bernadette of Lourdes
“Sometimes a person needs a story more than food to stay alive.”
Barry Lopez from his fable “Crow and Weasel”
“Wastefulness is the original Christian attitude...The entire Passion occurs under the sign of this complete self-wasting of God’s love for the world.”
From “Light of the Word” by Cardinal Hans Urs von Balthasar
“The Virgin used me as a broom to remove dust. When the work is done, the broom is put behind the door again. “
St Bernadette
“At my third request she (the Blessed Mother) put on a serious air and appeared to humiliate herself. She joined her hands, raising them above her breast. She looked towards heaven, then she slowly separated her hands, leaned towards me and said with a trembling voice: ‘I am the Immaculate Conception.’ “
From “Bernadette: The Only Witness” by Fr John Lynch, SM
“There was a child named Bernadette
I heard the story long ago
She saw the Queen of Heaven once
And kept the vision in her soul
No one believed what she had seen
No one believed what she heard
But there were sorrows to be healed
And mercy, mercy in this world...
We’ve been around, we fall, we fly
We mostly fall, we mostly run
And every now and then we try
To mend the damage that we’ve done
Tonight, tonight I just can’t rest
I’ve got this joy here inside my breast
To think that I did not forget
That child, that song of Bernadette...”
A truly inspiring, lovely song by the great Leonard Cohen (recorded beautifully by Jennifer Warnes in 1986)
In 1943 Jennifer Jones won the Oscar for her luminous portrayal of St Bernadette, in the film “The Song of Bernadette,” based on the 1941 novel of the same name by Franz Werfel. If you watch the incredible transformation on Jennifer Jones’ face when she first sees Our Lady of Lourdes, you see why she won. Her face goes from a shock-like fear, to disbelief or clearly bewildered...then into wonder and finally, total love. Her radiant face reflects the Woman she sees. It helps us all feel how we might feel if we were privileged to see the Mother of God. This icon was commissioned by the church of the Shrine of St Bernadette, here in Albuquerque in the early 1990’s. They asked for Bernadette to be in her religious habit of the Sisters of Charity of Nevers; the order she joined in 1866. I placed a candelabra behind her with 11 candles to signify the first time she saw Mary, February 11th, 1858. She is holding a bowl of water to signify the healing waters of Lourdes. When she was diagnosed with tuberculosis she refused the offer to be taken back from Nevers to Lourdes because she knew the healing waters were not for her. She is shown pouring them out of a bowl, symbolically emptying her life. She died on April 16, 1879 at the age of thirty five. St. John Paul II designated 11 February as World Day of the Sick in May of 1992. He wrote “a special time of prayer and sharing, of offering one’s suffering for the good of the Church and of reminding us to see in our sick brothers and sisters the face of Christ...” I’ll end with a most hopeful quote from St Bernadette: “If one dream should fall and break into a thousand pieces, never be afraid to pick one of those pieces up and begin again. We can always start all over again. Enjoy God’s amazing opportunities bestowed on us. Have faith in Him always.”
Fr Bill McNichols 💟 11 February 2022
Today is the XXX World Day of the Sick (in honor of the first apparition of the Blessed Mother at Lourdes , to St Bernadette , 11 February 1858)
“Jesus’ invitation to be merciful like the Father has particular significance for healthcare workers. I think of all those physicians, nurses,laboratory technicians, the support staff and the caretakers of the sick, as well as the numerous volunteers who donate their precious time to assist those who suffer. People who have made their service a mission. Because your hands, which touch the suffering flesh of Christ, can be a sign of the merciful hands of the Father.”
Pope Francis