The Silence of St Thomas Aquinas 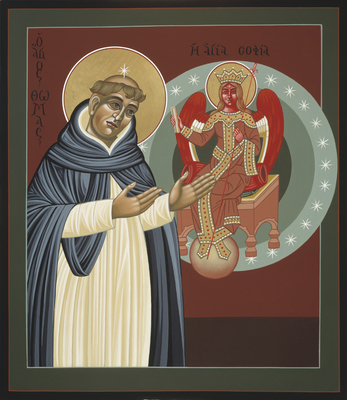 The Silence of St Thomas Aquinas (feast day January 28)
“There is nothing on this earth more to be prized than true friendship.”
St Thomas Aquinas
My Father, Stephen McNichols, was born on the old feast of St Thomas Aquinas, March 7, and so from my earliest childhood, I felt a connection between this saint and my Dad. He used to tell me stories about a dinner Thomas was invited to with St Louis IX and St Bonaventure. At dinner Thomas was so caught up with solving a problem, that suddenly, when he found the answer he burst out loud with it and everyone was embarrassed for him. But Good King St Louis had a scribe rush over to where Thomas was seated to be sure his thought was taken down in writing. There is another great story that in Thomas’ youth his classmates called him the dumb ox, because his silence was thought to be stupidity.
His holy teacher, the Dominican and scientist, St Albert the Great, (feastday November 15) told the students that one day they would hear a great roar from this dumb ox. As we all know, the world continues to learn from the genius of St Thomas, but who was quite controversial in his own lifetime. It was near the end of his life, on the feast of St Nicholas, December 6, while saying Mass that he had an experience of God so profound, that he gave up writing and said “All that I have written is straw...” (in comparison to his mystical vision or experience). And so Thomas “went into silence.” Another thing I hope we’ve all experienced is a teacher who can change your life. A woman or man who “sees you” and can bring out your God-given gifts. Just recently, a couple of you tubes popped up on my phone. It was two short videos of The Book of Revelation by two young men who call themselves “The Bible Project.” Because they were short I thought, I’ll give them a try and was amazed at the brilliance, masterful teaching, delightful graphics, and the depth they manage to achieve in just a few minutes. Since then I’ve listened to and watched Isaiah, Haggai, Habakkuk, Esther, Job, Ecclesiastes, Proverbs (the Protestant Bible only contains 3 of the Wisdom Books) .... Matthew, Psalms, Mark and many more, like the ones on just a Hebrew word, or concept, such as “holiness.” I can’t say enough about these wonderful teachers who open books of the Bible for you and then you can meditate on them with reverence “in a prayer.”
In my six year apprenticeship with master Iconographer, Friar Robert Lentz, OFM, I began to experience the importance of the silent mystery in so many enigmatic icons, such as “Mother of God Similar to Fire,” “Mother of God Your Lap Has Become the Holy Table,” or “Jesus Christ Redeemer Holy Silence.” I think in the West we are uncomfortable with mystery and silence. We want an immediate explanation of what we are looking at in a work of art, but that kind of impatience will only frustrate the viewer of icons.
This icon of Thomas Aquinas deferring to an apparition of Holy Wisdom, is the result of reading two books on the Angelic Doctor:
“Aquinas Search For Wisdom” by Vernon Bourke and “The Silence of St Thomas” by Josef Pieper.
(we ) “...man, in his philosophical inquiry, is faced again and again with the experience that reality is unfathomable and Being is mystery- an experience, it is true, which urges him not so much to communicate as to silence. But it would not be the silence of resignation, and still less the silence of despair. It would be the silence of reverence."
J. Pieper
Happy Feast Day Angelic Doctor St Thomas Aquinas!
Fr Bill McNichols 2020