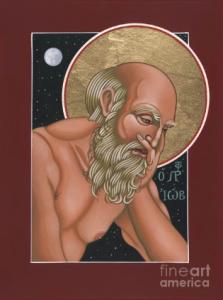 
(Antagonists)
Man is the sire of sorrow
(Job)
I've lost all taste for life
I'm all complaints
Tell me why do you starve the faithful?
Why do you crucify the saints?
And you let the wicked prosper
You let their children frisk like deer,
And my loves are dead or dying, or they don't come near.
(Antagonists)
We don't despise your chastening
God is correcting you
(Job)
Oh and look who comes to counsel my deep distress,
All these pompous physicians
What carelessness!

"The Book of Job is in several ways the most mysterious book of the Hebrew Bible. Formally, as a sustained debate in poetry, it resembles no other text in the canon...
The poet, having given Job such vividly powerful language for the articulation of his outrage and his anguish, now fashions still greater poetry for God... Poetry of such virtuosity and power, dependent as it must be on the expressive force that the original words and their ordering, is bound to pale in translation....
From Chapter 42 translated by Robert Alter:
"And it happened after the Lord had spoken these words to Job, that the Lord said to Eliphaz the Temanite : 'My wrath has flared against you and your two companions because you have not spoken rightly of Me as did My servant Job. And now take for yourselves seven bulls and seven rams and go to My servant Job, and offer a burnt-offering for yourselves, and Job My servant will pray on your behalf. To him only shall I show favor...' "

The Wisdom Books : A New Translation With Commentary by Robert Alter

The great artist and composer, Joni Mitchell , after a life of many physical ailments from polio, as a nine year old child, to morgellons disease, to a brain aneurism last year, distilled the 42 chapters of Job into a seven minute brilliant song.
Martin Pope's magisterial commentary on The Book of Job is 405 pages. Daniel Berrigan's rather recent ( Year 2000 ), written "in his own blood" commentary is 368 pages. Stephen Mitchell has a fairly new poetic translation, Rabbi Harold Kushner has written a comforting, extremely helpful book on Job, "The Book of Job : When Bad Things Happen to a Good Person." But for reasons I'll mention soon, my favorite is by Gustavo Gutierrez, "On Job:God Talk And The Suffering of the Innocent."
I don't think it could have been possible to be a friend and chaplain in the height of the AIDS pandemic in the United States (around the years 83-93) without turning to, contemplating and living inside, The Book of Job. I've tried to write about some of the experiences in "The Stations of the Cross of A Person With AIDS."
We all have times of great, extended physical, emotional and spiritual suffering.
Not only did Job lose a child, which is a terrible life -time wound for any parent, he lost ten children. Even the saints, such as San Isidro and his wife Santa Maria lost a child, and reading Mirjana Soldo's autobiography "My Heart Will Triumph" you see that having frequent apparitions of the Blessed Mother does not mean a lack of suffering will come to you; rather the "world " like Job's friends, tends to inflict more suffering the closer one is to God. Think of the great Carmelites, John of the Cross, Teresa, Therese, Titus Brandsma and Edith Stein. Recently I watched a documentary on the violence and racial suffering of Jackie Robinson, and "Loving" the movie about the interracial marriage of Richard and Mildred Loving in 1958, the tv series, "When We Rise", on Gay and Lesbian lives and response to the AIDS pandemic , and Andrew Garfield's brilliant portrayal of God's suffering servant, Desmond Doss in the film Hacksaw Ridge. Just the tip of the iceberg of those prophets ahead of their time, men and women, like Hildegard, Julian, and our own relatives and people we all look to for guidance - how do you live through such intense suffering without losing faith?
During the time I was a chaplain at St Vincent's Hospice in NYC I often heard from the patients that their greatest suffering was not as much the physical but the emotional and spiritual suffering of abandonment. This has been true ever since, with people recovering from cancer or any major disease, heart failure etc. The reason I am so fond of Gustavo Gutierrez 'book on Job is that he says the same thing about Job's suffering. That Job's deepest pain was feeling abandoned by God, in the same way Jesus felt during his agony in the Garden of Gethsemane until his last breaths quoting Psalm 22.
When God finally appears to Job in chapters 38-42, just the appearance is tremendously healing. If I could quote Gutierrez entire book, I would because it's impossible to sum up in a few words such deep theology, born of immense suffering. But let's end with a few of Gutierrez 'profound words which may come to you as an invitation to read his whole book:
"Perhaps those who live, and try to express, their faith and hope amid unjust suffering will some day have to say humbly with Job, 'I spoke without understanding marvels that are beyond my grasp, 'and put aside their harsh language. Yet who knows but that the Lord may tell them, to the surprise of some:
'You have spoken correctly about me. ' "