The Virgin of Tenderness of Yaroslavl 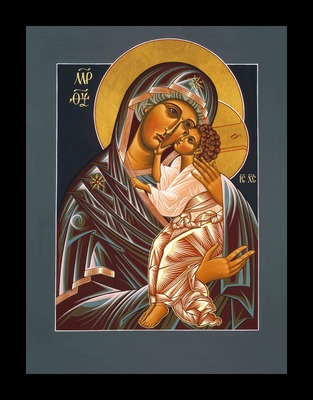 The Virgin of Tenderness of Yaroslavl
“...the Russian soul recognizes His voice and with ineffable joy throws itself at His feet. Apart from this faith and this hope, there is nothing left for us. The Russian land has been trodden by the Mother of God’s feet ... Yes, there is no need to fear for Russia, because Russia is saved by the strength of the Mother of God. And this, believe it, all of Orthodox Russia feels it clearly.”
Sergei Bulgakov 1918
This icon is a rendition of the prototype of the “Virgin of Tenderness of Yaroslavl,” which originally came out of the spiritually sensitive, simply-mystically elegant Moscow School of the second half of the fifteenth century, which also gave birth to the wholly/holy, child-like genius and “iconographer of iconographers,” St Andrei Rublev.
Every year round the time of my birthday, I try and show a specific icon I truly loved painting/writing. This year I (we) feel very much connected to the horrific conflict in Ukraine caused by one man in Russia, trying to destroy the soul of both Ukraine and Russia, and the daily violence we are so close to in our day; nearly every day. Are they related? I believe yes, they are. After you carefully look into both, I think you’ll see.
In March of 1917 the Russian Revolution overthrew the imperial government and in November the Bolsheviks took power. When I visited Magadan, Far East, Russia in 1995 and was commissioned to write the icons of Our Lady of Magadan and Our Lady of Pochaev I immersed myself myself in Russian history. You might find it helpful if you want to begin to understand what happened in Russia in to watch two films, first :
“Nicholas and Alexandra” 1971, (chronologically) followed by “Dr Zhivago” 1965. If you feel called to go deeper still, I suggest the brilliant “A Long Walk To Church” 1995, by Nathaniel Davis , an unflinching, and painfully distressing - yet loving - look into Russia after the revolution. Nathaniel Davis also wrote “The Last Years of Salvador Allende,” 1985.
From everything I learned in my reading, praying and research on Russian Orthodoxy, every city, even every tiny village, had/has an icon of the Mother of God . In other words, Russia is as Sergei Bulgakov wrote months after the revolution, “...trodden by the feet of the Mother of God.” I know this must seem impossible to believe, given the years after the revolution and right now with the violent assault on Ukraine, and the Orthodox Patriarch of Russia, submitting in obeisance to Putin. But if you doubt what I said, look at the life of Jesus, and the present happenings in Israel and Palestine. Why is their so much violence in the most holy places? For some reason, the Mother of God has claimed Russia as Her own. Look into the many images of the “not much more than a child “ (see Lady Julian of Norwich) Mary, crushing the head of the deadly serpent. Look into the apparitions in Paris of the Miraculous Medal, 1830.
The question is, how could Bulgakov write something so confidently filled with “hope against hope,” during the appalling violence he was witnessing all around him ?
There is not space here to tell you why Russia is so dear to the Mother of God. When the revolution happened, the dominant legend is that an icon appeared in a tree entitled “Mother of God, She Who Reigns.” I have also copied this prototype and the central message of this icon, is that Mary will reign until Russia returns to Her, as their truly Infinitely Loving Mother. Now, perhaps, the messages of Our Lady of Fatima, concerning Russia will begin to fall into place, “...but in the end, my Immaculate Heart will triumph.”
About that “hope against hope,” you may also want to read into a book that continues to change my life, “Images of Hope: Imagination As Healer of the Hopeless,” by the late Fr William Lynch, SJ.
“ O Lord, my heart is not proud,
I do not set my sights too high.
I have taken no part in great affairs,
in wonders beyond me.
No, I hold myself in quiet and silence.
Like a little child in it’s mother’s arms.
Let us hope in the Lord, now and forever.
Amen “
Psalm 131
Fr William Hart Dominic McNichols 💮 10 July 2022