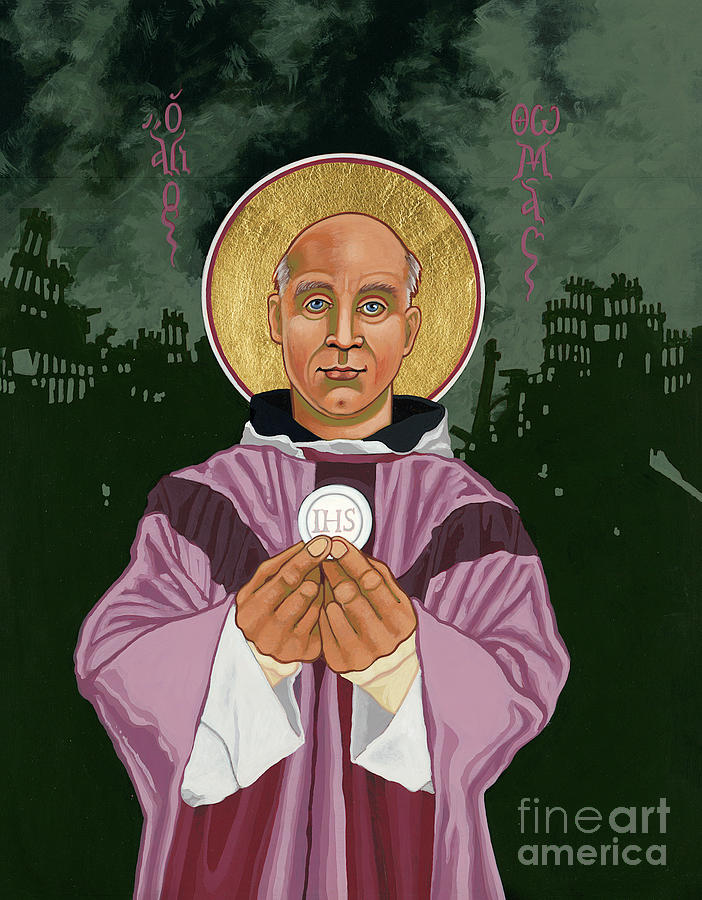 Holy Prophet Thomas Merton : Gaudete ! Christus est natus !
“Into this world, this demented inn, in which there is no room for him at all,
Christ has come uninvited.”
Thomas Merton

"Even if a unity of faith is not possible, a unity of love is."
Hans Urs von Balthasar

When I was a child in the 50's we were not allowed to go into any church that was not Catholic; let alone any synagogue, temple or mosque. Native American religion was considered paganism as were all eastern religions.
At the same time the monk and priest, Thomas Merton, was beginning to scan the entire world's religions in a Spirit led search for the similarities in our common need and common journey into God.
By the age of 24 as a teacher at St Regis High School in Denver, I was required to teach St Mark's Gospel and Houston Smith's book "World Religions."
Just a few years later in 1983, at the age of 33 in New York City, as a Hospice Chaplain for people with HIV/AIDS I was speaking to people of every faith and performing funerals for people of no faith and all faiths.
What had happened to open the Church to embrace the world instead of condemn it?
Certainly Vatican Council II and it's great theologians who influenced the Council and began to dialogue with the reformed churches and world religions ... von Balthasar with Barth, de Lubac with Buddhism, Rahner , Schillebeecxk , and even de Chardin ... with the entire cosmos.
But most of all, I believe Thomas Merton is responsible for giving us all "permission" to engage and respect people of all faiths. His writings and actual life journeys, spread far and wide into the lives of men and women theologians, and ultimately into all of our lives.
So it seems totally natural to invoke him during this week of Prayer for Christian Unity.
Here is a man whose insatiable spiritual curiosity led him into dialogue with not only other Christian denominations but also with the world.
This is my second commissioned icon of Thomas Merton. When I was commissioned earlier this year, by the Thomas Merton Center, I found it extremely daunting, challenging and also a blessed opportunity to find a part of Merton, that I felt was often unrepresented; his priesthood. I don’t mean only his priesthood in the Roman Catholic Church, but his priesthood for and to the entire world.
Because Thomas died 10 December 1968, I waited until Advent to begin this icon along with commencing again, my research about the man who has become more influential as the years go by. In the many books I consulted, I was acutely aware of his lifelong immersion in one war after another. Like Jesus himself, Thomas was born “into this demented inn,” a world afflicted by violence and continual war, that followed him all through his life. An idea for the icon began to emerge.
In 1968 Gaudete Sunday was 15 December, just five days after his death. There are only two times in the liturgical year when the vestments for Mass are rose or pink colored, which is the liturgical color signifying Joy. These two sundays are Gaudete Sunday, the third Sunday in Advent and Laetare Sunday, the fourth Sunday in Lent.
I chose to portray Thomas in the vestments of Gaudete Sunday, something he would have experienced that year, 1968, in heaven. I am definitely not a Merton expert, but I know that the Eucharist is the center of the life of most every priest I have known or know now. We don’t always talk about it, because it’s something that is so much a part of our lives, that we all hope it should be easily seen. I saw that clearly in Thomas’s life.
In this icon Thomas offers Christ to the world, a broken world in every way. The debris of violence and war clutter the background behind him. It could be the debris of any war, the tragedy of 9/11, or the present wars in Ukraine and around the world. He emerges from that broken world, from which his life and work continue to minister and contribute to the eventual arrival of the kingdom of God.
Once Daniel Berrigan, SJ, when we were in the same community in the 1980’s, told me that it took him 10 years to get over Merton’s death. So many of my friends and especially my theologian friends, feel the same way about his ongoing impact in their lives. I think, I hope, and I pray, in this icon Thomas is inviting you/us to bring Christ into our world. We are each given absolutely unique ways to do that, and God is capable of giving the gifts freely given to us, to a world so desperately in need of beauty and love...
“For nothing shall be impossible with God.” (Luke 1:37)

Congratulations on your sale!

Great work 👍 congratulations on your sale 🎉

William, congratulations on your sale of this amazing painting!