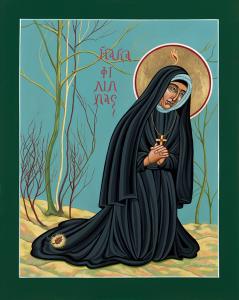 “Qua-kah-ka-num-ad”:Woman Who Prays Always
St Rose Philippine Duchesne : 29 August 1769 + 18 November 1852
I don’t remember where I found the book “The Way of a Pilgrim.” Most probably in the once tiny, magical bookstore, The Tattered Cover, when it was housed in an almost fairytale-like house in Denver. I was just 24 and teaching high school art and theology at Regis high School. At that small bookstore I also found books on some of the greatest illustrators, like Edmund Dulac, Jesse Wilcox Smith, Arthur Rackham, and a Russian illustrator who would affect my two self-portraits, the masterful genius, Ivan Bilibin. Later, I would learn that Bilibin’s style of putting beautiful objects in little boxes around an illustration was taken directly from “talking icons” - that is icons with a saint in the center surrounded by little pictures of his or her life. This was actually the beginning of children’s books.
At that time in my life I dreamed of one day becoming an illustrator, and I too, like the young man in “The Way of a Pilgrim” was aching for a contemplative life that did not exclude loving others (or isolation), and enabled other artistic gifts of God to flourish (1 Corinthians 13). “The Way of a Pilgrim,” is described in one of its many editions as “This enduring work of Russian Spirituality first published in 1884, has charmed countless people with its tale of a nineteenth century peasant’s quest for the secret of prayer. Readers follow this anonymous Pilgrim as he treks across the Steppes of Russia in search of the answer to one compelling question. How does one pray constantly?” On the 18th of November we celebrate a woman who found a way.
Many years ago I was in St Louis for a meeting and I was invited by my now deceased classmate, Brother Tom Naughton, SJ to celebrate Mass for his community that evening, it was November 18. Because we were out all day I got to the community house right before Mass and went into the sacristy to become vested for Mass and to look at the Ordo of Prayer and Celebration of the Eucharist, sure there was not a major feastday. I was shocked that here was a woman who was a saint and the only one who’d ever lived in the area. I was humiliated that I knew nothing about her, though I had heard her name often from older Missouri Province Jesuits. This is what I found in the Ordo, literally minutes before I was to celebrate Mass:
“18 November, Rose Philippine Duchesne, + 1852 at age 83 at St Charles, Missouri; from Grenoble, France; founded the first American house of the religious of the Sacred Heart; opened the first American free school west of the Mississippi; known for her courage and desire to serve native Americans, especially the Potawatomi who called her Qua-kah-ka-num-ad, the ‘woman who prays always.’”
It was this designation that became a lifetime quest or deep desire, for me at that moment. The story goes that some Native Potawatomi men saw Philippine kneeling in prayer so they put an oak leaf on the back of her dress, and came back hours later, and it was still, unmoved on the back of her (habit) dress. The next day I asked Tom to drive us to her shrine so I could ask of her, to intercede for me, that one day, I would be granted her gift of praying always. For me I cannot think of any better gift, and I’m still praying for that gift to Philippine. To be in a prayer always, means for me,to live in love of God. To be in conversation with God, as much as possible and I have met many people who feel a longing or call to this way of living. They are all different, some married, some single... the call from God doesn’t seem to discriminate in any way. November has always been my favorite month, because I love the bone dry muted colors of all of nature, and right near the middle of this beautiful month of thanksgiving, we have this incredible woman to celebrate. A blessed coming November!
“And I will give you the treasures of darkness and hidden riches of secret places,that you may know that it is I, the Lord, the God of Israel, Who calls you by your name.” Isaiah 45:3
Fr William Hart McNichols