The Proskynesis of St Stanislaus Kostka 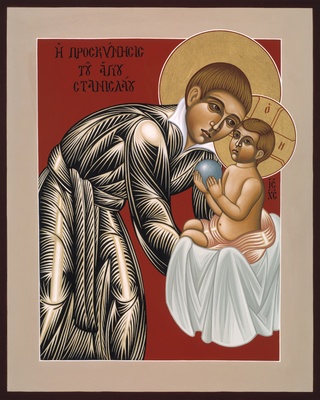 The Proskynesis of St Stanislaus Kostka (1550 - 1568)
“I find heaven in the midst of saucepans and brooms.” St Stanislaus Kostka
“Born to the Polish nobility, the son of a senator. Attended the Viennese Jesuit College from age 14 with his brother Paul, who badly mistreated him. While staying at the home of a Lutheran, he became gravely ill but was not allowed to call for a Priest. He prayed to his personal patron, St Barbara, who appeared to him in a vision with two angels, and administered Communion. He was then cured from his disease by Our Lady holding the Holy Child who placed Him in Stanislaus’ arms to hold. Our Lady then told him to become a Jesuit, though it was against his family’s wishes. He attended the Jesuit College in Rome and was a friend of St Peter Canisius. Stanislaus became a Jesuit Novice in October 1567, and student of St Francis Borgia...between 3 and 4am of August 15, 1568, the feast of the Assumption of the Blessed Mother, he died in Rome.”
(Profile from Catholic Saints and a few additions from me ...)
This is one of my very favorite icons. I was 40 years old when I began my iconographic apprenticeship. It was painted/written, during the loving and intense period of great fervor which lasted (nonstop) for over 10 years; a time when I was painting night and day. The word “proskynesis” means bending low in adoration. Since St Stanislaus was so young when he died, I wanted to show him as not too much larger than the Holy Child. I was commissioned to paint/write several Jesuit saints for the New York Novitiate which was in Syracuse at that time.
I was to do the three famous young boy saints, Stanislaus, Aloysius and John Berchmans, I never did get to do John, which I regret because I often visited the chapel of his apparition at Grand Coteau, Louisiana (where I made Jesuit Tertianship). It was in 1866 St John Berchmans healed a young novice, on her deathbed, named Mary Wilson. I was allowed to add two more of my favorite Jesuits; the Martyr Rutilio Grande and the Worker Priest Egide van Broeckhoven, both are on my website.
My earliest memory of Stanislaus was from my childhood. My Aunt Mamie O’Haire had a very large framed sepia print of a painting of St Barbara and two attending Angels bringing the Eucharist to St Stanislaus. This is one of the miracles of his brief life. Then as a Jesuit Novice at age 19 (one year older than Stanislaus, who died at 18) I was given the honor of preaching a panegyric (a homily or speech in praise of someone) on his feast. This was a tradition of every Novitiate, long ago, that one Novice would be asked on November 13 to honor St Stanislaus . I remember I was shy about public speaking, frightened and did a terrible, awkward job. One of the elderly Fathers sitting in the back of our incredibly beautiful Novitiate Chapel, (filled with Jesuit saints, in Florissant, Missouri) sat upright straining to even hear me, summoned me to him, after my failed attempt, and gave me kind but firm criticism. It would take me at least 5 years after being ordained a priest, to finally find my own preaching voice. I kept trying to copy or mimic the great Jesuit preachers in our community, especially Fr John J. Walsh, SJ. He was so extraordinary, that we all thought we had to be like him.
During the Hospice years, (80-90) I was very blessed, for just one year, to live in one of the most magical and beautiful estates I have ever seen, in the entire world. Not because of any great opulence, but because of the incredibly imaginative indoor/outdoor carvings,and fairy tale bas reliefs, as well as a small exquisitely gorgeous chapel to St Nicholas and St Genevieve. The whole experience was like living inside a children’s book, or an abbey or an art museum. It was St Ignatius retreat house, in Manhasset, Long Island, New York (now sadly torn down) which was given to the Jesuits by Nicholas and Genevieve Brady. The Brady’s named the estate “Inisfada” - the Gaelic word for Long Island. I could write an entire blog on that very “alive” mansion or estate with its lovely grounds. It was also in the midst of my Illustration career, and the Jesuit Rector of the Community invited me to create the house Christmas card. Because I’ve always been intrigued by the male saints who are portrayed holding the Infant or Child Jesus, I decided to draw the Jesuit saints known for a devotion to the Child. I did three :
Stanislaus Kostka, Bernardino Realino, and Robert Southwell. I think the male saints like Joseph, Anthony of Padua and Cajetan who hold the Child, signal, perhaps unconsciously, a special tenderness and trust inside of us. St Stanislaus was a special favorite of St John Paul II and the Medical Doctor and brilliant Mystic, Adrienne von Speyr. He is patron of novices, seminarians, people with broken bones, aspirants to the Oblates of St Joseph, the last Sacraments and, of course, Poland.
“Lord our God, you looked upon St Stanislaus Kostka with love as he consecrated his youth to you with such generosity of heart. Renew us in spirit so that we may be eager and joyful as we walk the way of your commandments. Help us to fill our days with good works and so redeem the shortness of this life. We ask this through Our Lord Jesus Christ, your Son, who lives and reigns with you and the Holy Spirit, one God forever and ever. Amen”
From the wonderful book “Jesuit Saints and Martyrs” by Joseph Tylenda, SJ
13 November 2020 💮 Fr Bill McNichols