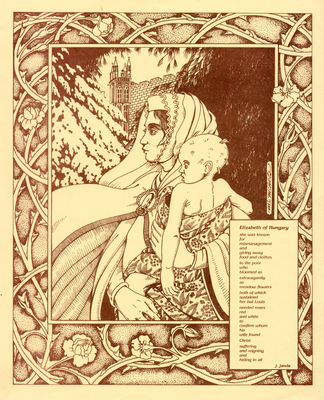 St Elizabeth of Hungary 💮 (7 July 1207 - 17 November 1231)
“We must give God what we have, gladly and with joy.” St Elizabeth
“What is sanctity but the mystery of beauty?” Nesta de Robeck (1886-1983)
“She was known
for
mismanagement
and
giving away
food and clothes
to the poor
who
bloomed as
extravagantly
as
meadow flowers
both of which
sustained
her but Louis
needed roses
red
and white
to
confirm whom
his
wife found
Christ
suffering
and reigning
and
hiding in all”
By Fr Jim Janda (30 March 1936 - 7 August 2010)
I think it was a year or so before she died that Elizabeth found a boy suffering with scurvy and she nursed him back to health. That boy is shown with her in this illustration I did for my dear friend, Fr Jim Janda and his delicately inviting and loving poem.
I have been a great fan of Nesta de Robeck’s lives of Franciscan saints, (Francis, Clare and Elizabeth) and her book on the The Christmas Crib - which tells the true story of how the crib came into being. St Francis did not invent the crib, but “downsized” it. I know there are lots of books on these 3 saints but Nesta’s biographies are so appealing to me, especially her 1953 book of St Elizabeth, “Saint Elizabeth of Hungary: A Story of Twenty-four Years.” Here is a description of Elizabeth’s brief life by another great writer on saints, Robert Ellsberg from his wonderful book “Blessed Among Us : Day by Day With Saintly Witnesses.”
“St Elizabeth, the daughter of Hungarian royalty, was betrothed as a child of four to Ludwig, the nine year old prince of Thuringia in southern Germany. Despite this arrangement, the two children established a close friendship that eventually blossomed into a loving marriage. Elizabeth bore three children. But Ludwig’s family disapproved of her piety (she had become a Franciscan tertiary) and especially her ‘excessive’ charity toward the poor and sick. Ignoring their wishes she opened the royal granaries during a time of famine. This won her the people’s devotion, though such generosity made her an object of scorn among the elite members of the court.
In 1227 Ludwig embarked on a Crusade and died on his journey. In a paroxysm of grief, Elizabeth cried, ‘The world is dead to me, and all that was joyous in the world.’ Without her husband’s protection, she was forced to leave the palace on a winter night, carrying nothing but her newborn child. She accepted shelter in a pig shed.
Eventually to avoid scandal, she was provided with a simple cottage, where she supported herself by spinning and fishing. Otherwise, she visited the sick in their homes or in the hospices she had endowed. Over time, her reputation for holiness spread, and she earned the grudging respect of those who had persecuted her. She died on November 17, 1231, at the age of twenty-four. She was canonized less than four years later.”
Very few married couples are both canonized, and Blessed Louis, or Ludwig is commemorated on 11 September. There are many tales and miracles around the story of Elizabeth. One legend I always like to remember is that Francis was still alive when Elizabeth became a Third Order Franciscan. She asked some traveling Franciscan Friars to bring her something from Francis. He sent his shawl which she wrapped round her while she prayed, and claimed that God always answered her wrapped in Francis’ garment. We have a wonderful group of women at our church of St Joseph on the Rio Grande, who knit shawls for anyone who is sick. So, because of Elizabeth’s story I asked them for a green one, so when I pray I still use it. I should also tell you there is a beautiful oratorio by Franz Liszt called The Legend of St Elizabeth, here’s a review:
“Mahler admired this piece very much, but it has not received anything like the attention it deserves. This is,in fact, it’s only recording, and thank heaven, it’s such a fine one. St Elizabeth of Hungary, is one of the patron saints of the poor and downtrodden. A woman of uncompromising goodness and strength, she suffers a series of misfortunes (she loses her husband in a war, gets thrown out of her home by her mother-in-law, has her children taken away) but retains her faith until her death in utter poverty. Liszt had a strong social conscience, he cared about the poor, and he lavished an enormous amount of care on this moving tribute to their divine protector. It may be something of a curiosity, but it’s a worthy one.”
David Hurwitz
Dearest St Elizabeth,
You suffered so much deeply personal loss and abuse during your brief life.
And yet, you could find the holy motivation and strength to care for the sick; like the little boy you sheltered and healed with your attending love.
Be with us now as we are suffering with this pandemic.
Help us do whatever we can to heal one another.
Amen
Fr Bill McNichols 💮 for the “new/changed feast” of St Elizabeth, 19 November