The Revelations of Julian of Norwich 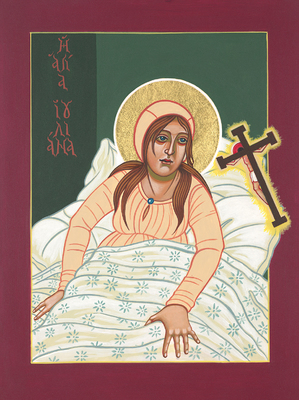 The Revelations of Julian of Norwich
“Pray, even if you feel nothing, see nothing. For when you are dry, empty, sick or weak, at such a time is your prayer most pleasing to God, even though you may find little joy in it. This is true of all believing prayer.”
Lady Julian of Norwich
In 1974 I moved from Boston, where I’d been attending Boston University for art classes and Boston College for philosophy classes, to my hometown of Denver to begin the Art Department at Regis High School. I was 25 and not that much older than my students, and yet, I tried as best as I could to bring something to them. One elder teacher gave me wise advice : “They may not remember a thing you said, but they will remember that you loved them.” And I did - hoping they remember that now. A few Jesuits did not want to live in the large high school so a house was rented and five of us moved in. The house was very close - walking distance- to the school, and it was on Julian street...so it became Julian House. That same year one of my loving mentors Fr John Walsh sent me a British hard back copy of a book on Julian of Norwich, telling me in his note inside the book, “Dear Billy, you will love Julian. She is the most positive and joyful mystic of all, love, Fr Walsh.” Later I sent that book to another mentor and friend Fr James Janda. He was a magnificently gifted poet and had been very impressed by seeing Julie Harris in a one woman play about Emily Dickinson called, “The Belle of Amherst.” So he spent years researching Julian’s life, finding out she was a contemporary of Chaucer and the first known woman to write in Middle English and that she had survived 3 outbreaks of the Black Plague in England. He decided to write a one woman play about her and I was blessed to do the illustrations. The play “Julian” was published by Seabury Press in 1984. Just this past December my dear friend Mirabai Starr and my new friend Fr Matthew Fox did a series of inspiring talks and classes for Shift Network on Lady Julian. I joined them to discuss her on a “first bonus session” and that’s how I finally met Fr Matt. I believe the first available contemporary English translation was printed by Paulist Press in 1977. Mirabai has a beautiful translation “The Showings of Julian of Norwich,” 2013, Hampton Roads Press.
And Matthew just published “Julian of Norwich: Wisdom in a Time of Pandemic and Beyond,” i Universe Press, 2020. I myself had illustrated the play I mentioned showing Julian as a middle aged woman, but I always wanted to show her as the young, bedridden woman just 30 years old. I finally got a commission to paint/write her icon. Since I make my living on this work - I go from commission to commission and can rarely take off to paint someone just because I love them... but I do sometimes anyway ! At 30 Julian had what we now call a NDE - near death experience. It lasted 3 days and when she emerged she began to write her short versions of the Revelations given to her by the Crucified Jesus. Later in her life as an Anchoress (female hermit) she expanded her work into a much longer version. Since that first edition of 1977 there are now numerous translations and luckily, many many books on Lady Julian.
Both TS Eliot and Thomas Merton were astonished by her theological depth and also her “seemingly effortless” ability to convey complex dogmatic - tightrope walks - to the ordinary reader as well as the theologian. She has been a part of my life since I was 25 and I have returned to her often. I could write pages on just how many ways she has influenced my paintings and images before I began my iconographic apprenticeship. But she seems especially available to us now as we live in our own “Anchorholds” during the continuing pandemic; none of us know when it will lift for good. If you want to know her yourself I’d suggest Mirabai’s translation which I mentioned above. I’ll end now with Julian’s final words in the play:
Life
is a precious thing
to me
and a little thing:
my life is a little thing,
when it will end here
is God’s secret.
And the world
is a little thing,
like a hazelnut
in his-her hand -
but it is in his ever-keeping,
it is in his ever-loving,
it is in his ever-making,
how should anything be amiss?
Yes, all shall be well,
and all will be well,
“and thou shalt see thyself
that all manner of thing
shall be well.”
Kind friends,
I pray God grant you
all your good wishes,
desires, and dreams -
it is all in the choosing,
it is all in the asking.
From the play “Julian” by
Fr J. Janda (1936-2010)
Dear Lady Julian
Please help us now to live through these days when we’re not used to this endless seclusion. It makes us often frightened, irritable, tight, inflexible and then ... we become distant from ourselves and God. You chose relative solitude to listen for the voice of God.
And our patron this year, St Joseph, was given a hidden, secluded life to protect Mother and Child; and he was also schooled during his life to listen for the voice of God. Help us, calm us, teach us to wait and trust that God longs to love us evermore deeply and longs to speak with us in our hearts and souls, until our time on earth is completed and we are within God forever.
Amen
Fr Bill McNichols 💮 February 2021